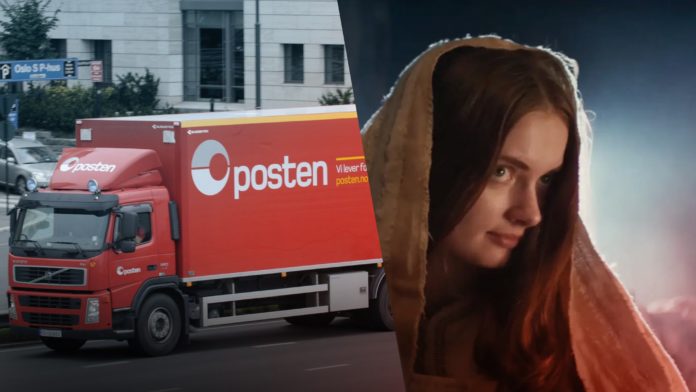 Apparently, the Norwegian Postal Service’s idea of wishing people a Merry Christmas is to say that Jesus Christ was conceived in an illicit affair between the Virgin Mary and the mailman.

“The ad which the Postal Service said is meant to ‘create awareness about Posten in a warm, humorous and surprising way,’ is incredibly offensive to Christians as it not only denies Jesus’ divinity and the Virgin Birth, it implies that Mary was unfaithful to Joseph, willingly having sex with any man who knocked on her door,” reports LifeSite News.

The ad begins with an ancient postman delivering scrolls from Emperor Augustus to fellow citizens of Israel demanding they register for the census. When he happens upon the home of the Virgin Mary, sparks immediately fly between the beautiful teenage girl and the awestruck delivery man. Flash forward nine months later, Mary has given birth to the baby Jesus in the manger with Joseph at her side – an idyllic Christmas card moment except for a final shot of the mailman trotting atop his donkey through a starry-skied desert with a contented smile across his face.

“Well, maybe that’s not quite how it happened in those days,” a narrator says. “But whatever the story, Posten has always been an important part of Christmas.”

As noted by LifeSiteNews, the ad has generated some intense backlash on social media, with Christians denouncing it as “blasphemous” and an insult to the Christmas story.

“It should be very clear by now that the enthronement of sexual promiscuity as an ultimate idol necessarily hates virtue, innocence and self-sacrifice,” said another Twitter user.

“This is not edgy nor funny. It serves no purpose but to insinuate Mary was some kind of slut…” said another user.

The Posten ad comes at the same time Netflix released a comedy special that portrays Jesus as a homosexual and Mary as a pothead, which has prompted some Christians to cancel their subscriptions to the streaming service. As The Daily Wire’s Joe Curl reported on Tuesday, “more than 500,000 people have signed a petition titled, ‘Ask Netflix to cancel film depicting Jesus as a homosexual!’”

“Another petition on change.org has collected nearly two million signatures,” Curl reported. “Signees are ‘in favor of the removal of the film from the NETFLIX catalog and for the ‘Porta dos Fundos’ to be held responsible for the crime of villainous faith.’”

The Daily Wire’s Matt Walsh argued that Netflix has essentially told Christians they do not want their business and should honor their wishes by canceling subscriptions.

“Christians should oblige and cancel their Netflix subscriptions. This isn’t a boycott. It isn’t even a statement on our part. Netflix is the one that made the statement. That statement is clear: If you’re a Christian, we don’t want your business,” Walsh said. “What else are we supposed to do but oblige?”