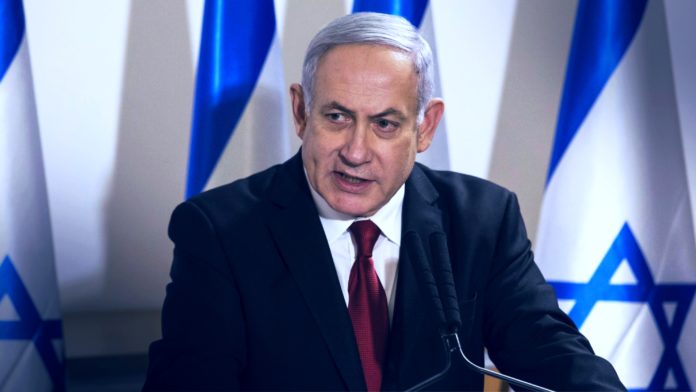 Prime Minister Benjamin Netanyahu on Friday evening lambasted a decision by the International Criminal Court’s chief prosecutor to proceed with an investigation into war crimes allegedly committed in the Palestinian territories.

“This is a dark day for truth and justice,” Netanyahu said in a statement, calling prosecutor Fatou Bensouda’s ruling “scandalous and baseless.”

He said the decision made the Hague-based court, which Israel has refused to sign up to since its creation in 2002, a “political tool” against the Jewish state. He claimed Bensouda “entirely ignored serious judicial arguments we presented.”

Netanyahu argued that the ICC “has no authority to adjudicate the matter. It has jurisdiction only in lawsuits presented by sovereign states, but there has never been a Palestinian state. We will not accept or acquiesce to this injustice. We will continue to fight it with all the tools at our disposal.”

He also expressed astonishment that Bensouda “says it is a crime, a war crime, for Jews to live in their homeland, the land of the Bible, the land of our forefathers.” Bensouda had said Israel’s policy of settling its civilians in the West Bank could constitute a crime.

The Palestinian Authority welcomed the decision, calling it “a long overdue step to move the process forward towards an investigation, after nearly five long and difficult years of preliminary examination.”

Saeb Erekat, Secretary-General of the Palestine Liberation Organization, said it was “a positive, encouraging step that brings Palestine closer to the opening of a criminal investigation against war crimes that have been committed, and to an end to the immunity of those who committed the crimes.” He added that it would “contribute to prevention of crimes.”

Despite being accused by Bensouda of possible war crimes itself, the Hamas terror group welcomed the decision, saying it “reveals the character of the Israeli occupation in the international system [and] the immensity of the injustice carried out against the Palestinian people.”

Yair Lapid, the co-leader of Israel’s Blue and White party, was critical of the ruling, calling it “a capitulation to the false and defamatory propaganda of Palestinian terror.

“As someone who was a cabinet member and a member of the [Knesset] Foreign Affairs and Defense Committee, I can testify that in all the annals of war there has not been an army that has done more than the IDF to avoid harming innocents.”

Meanwhile Blue and White MK Zvi Hauser, who was Netanyahu’s cabinet secretary between 2009-2013, blamed the prime minister for failing to prevent the PA from joining the court in 2015 and reacting with “complacency” to the move.

“Today we are beginning to suffer the fruits of the historic failure of 2015. Netanyahu, take responsibility,” he tweeted.

Anticipating Bensouda’s announcement, Israeli officials had earlier made public a legal opinion by Attorney General Avichai Mandelblit arguing that the court has no jurisdiction for an investigation. He claimed that by turning to the ICC, the Palestinians were seeking “to push the Court to determine political issues that should be resolved by negotiations, and not by criminal proceedings.”

According to the Foreign Ministry’s legal adviser, Tal Becker, “There is a Palestinian effort to criminalize the conflict, where only the Israelis have legal obligations and only the Palestinians have rights. But as history has shown, that will only drive the two sides further apart.”

“Law is relevant to some extent in peacemaking but criminalizing the relationship [between Israel and the Palestinians] is sure to polarize,” he added.

The preliminary examination by the ICC was launched in 2015 after the PA signed the Rome Statute and formally accepted the court’s jurisdiction over its territory. It probes Israeli construction beyond the Green Line, the 2014 Gaza War and the so-called March of Return Gaza border protests that began in March 2018.

Bensouda has in the past indicated that the question of whether the court has jurisdiction was a complicated one, which is why the attorney general last year decided to issue a paper explaining Israel’s point of view, said Roy Schöndorf, the deputy attorney general for international law at the Justice Ministry.

The attorney general’s report only deals with the ICC’s supposed lack of jurisdiction. Mandelblit did not address other matters the prosecutor has to take into account as she weighs whether to open an investigation, such as whether the alleged crimes committed in “Palestine” are grave enough to merit the court’s involvement, or whether local courts can be relied on to investigate these alleged crimes.

Earlier this month the ICC’s Report on Preliminary Examination Activities had made headlines in Israel for stating that Bensouda “followed with concern proposals advanced during the recent electoral process, to be tabled to the Knesset, for Israel to annex the Jordan Valley in the West Bank.”

Netanyahu has repeatedly promised to quickly apply Israeli sovereignty over the Jordan Valley — a quarter of the West Bank — if he is able to put together a new government amid the ongoing political gridlock. His Likud party has even claimed that the premier is only interested in staying in office for an additional six months — a unity coalition negotiation demand — in order to see the promise through.

The Palestinians, too, were unhappy about this year’s report, as it highlighted the Palestinian Authority police’s alleged torture of civilian detainees and the PA’s financial compensation of those involved in carrying out terror attacks against Israelis.