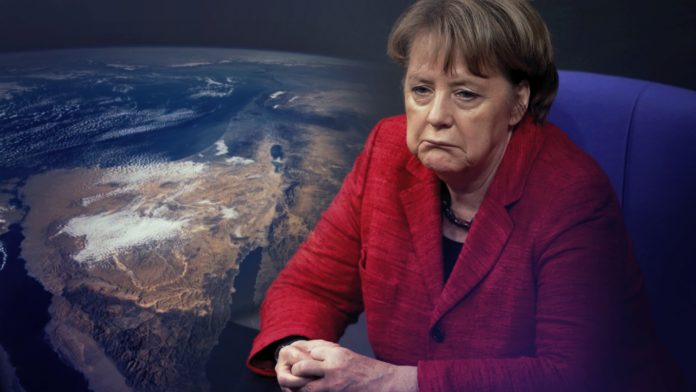 German Chancellor Angela Merkel’s government has declared that Iran’s call to obliterate the State of Israel is not an expression of antisemitism.

When the Post asked the Merkel administration if it agreed with the Foreign Ministry statement, a government spokesman told The  Jerusalem Post: “We have nothing to add to the reply of the foreign office.”

The Post had specifically asked if Salami’s statements were antisemitic.

In late September, Salami delivered his call to exterminate the Jewish state before an audience of IRGC leaders that was publicized by the state-funded IRNA agency, as well as other Iranian regime-controlled outlets.

Salami said that “This sinister regime must be wiped off the map and this is no longer… a dream [but] it is an achievable goal.”

He added that his country has “managed to obtain the capacity to destroy the impostor Zionist regime” 40 years after the 1979 Islamic revolution.

Germany’s Foreign Ministry issued the following statement in German and English: “We condemn the recent threats by the Iranian Revolutionary Guard Corps against Israel in the strongest possible terms. Such anti-Israel rhetoric is completely unacceptable. Israel’s right to exist is not negotiable. We urge Iran to commit to maintaining peaceful relations with all states in the region and to take practical steps to de-escalate tensions.”

Dr. Efraim Zuroff, the chief Nazi-hunter for the Simon Wiesenthal Center, told the Post on Monday that “The condemnation by the German Foreign Ministry of the recent threats to destroy Israel by Hossein Salami, commander of the IRGC, seems to ignore the starkly antisemitic dimensions of his comments. To reduce them to ‘anti-Israel rhetoric’ is to ignore the obvious antisemitic component and their genocidal intent.”

Zuroff, a widely acknowledged expert on antisemitism who oversees the Wiesenthal Center’s Jerusalem office, added that “The verbal condemnation of the German Foreign Ministry should be accompanied by practical steps to expel Iran from UN and to boycott all commerce with the fanatic fundamentalist Islamic regime, instead of [Germany] promoting business with Iran and seeking ways to circumvent sanctions against a terrorist regime in Tehran.”

Prof. Gerald Steinberg, founder and president of NGO Monitor and professor of Political Studies at Bar-Ilan University, told the Post that “The Germans, and Merkel in particular, should be the first to condemn Iran’s genocidal threats against the Jewish state as antisemitism. Instead, by taking refuge behind the canard that ‘anti-Israel’ language can be distinguished from antisemitism, they undermine the international consensus behind the IHRA [The International Holocaust Remembrance Alliance] working definition.”

Steinberg, an expert on contemporary antisemitism, added “Every aspect of Iran’s campaign to destroy Israel is anchored in hatred of Jews and Jewish national self-determination, including many of the images that echo Nazi propaganda. In the time she remains in office, Merkel should give high priority to undoing the damage she has done by failing to confront Iran.”

Also in February, German President Frank-Walter Steinmeier sent a telegram to the mullah regime in Tehran that praised Iran’s revolution.