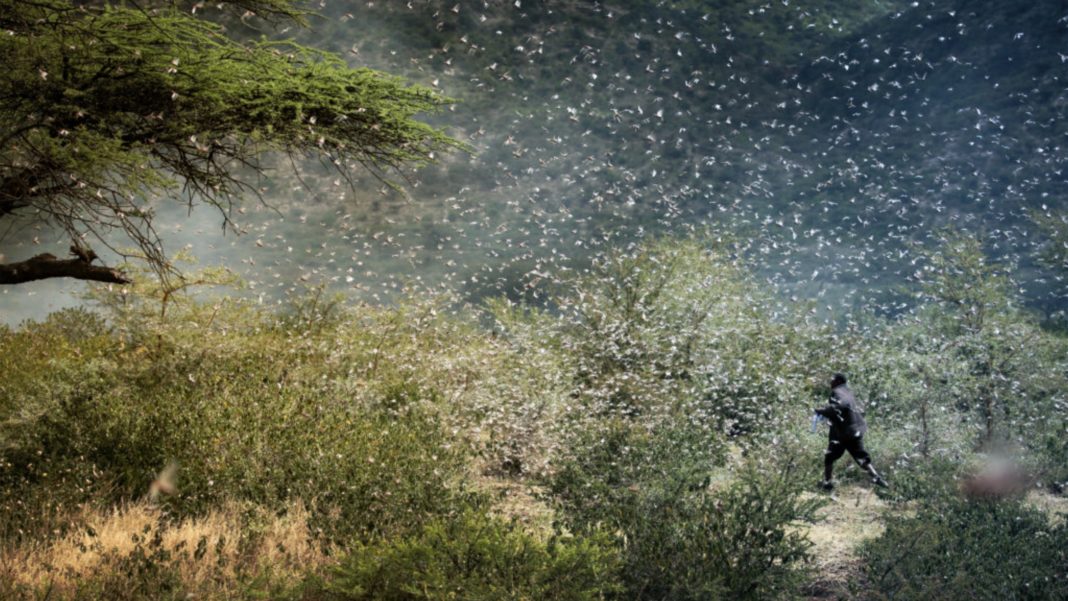 The swarms of locusts that covered Africa last year returned, pushing several nations into a food crisis. But just like pre-Exodus Egypt suffered waves of plagues that left the land barren, unseasonal rains generated an extra and unexpected generation of grasshoppers that experts believe could be 8,000 times larger than what has already been seen.

Officials issued warnings that the current wave of locusts that has been swarming over parts of Africa, Asia, and the Middle East since last December will probably continue for the rest of the year. According to a new report from the International Rescue Committee, a new round of hatching could result in swarms that are 8,000 times larger than swarms earlier this year. The locusts normally live for three months but unseasonal rains have led to massive breeding and multiple generations, prolonging the season in which the locusts normally swarm. Erratic weather systems have aided the spread of the swarms.

The current mega-swarm, the worst in many decades, originated in Yemen but now threatens 13 countries including Kenya, Ethiopia, Somalia, Sudan, India, Uganda, Pakistan, and southern Iran. The infestation threatens the food security of some 40 million people, many of whom are already in danger of starvation. Somalia, which is expected to be the hardest hit, could see 50%-70% losses of some crops. The country’s farms and pastures were previously hit by drought in 2017 and 2019, followed by flooding. In Kenya, at least 173,000 acres of land were infested in January, making it the country’s worst locust event in 70 years.  The Food and Agricultural Organization (FAO) senior locust forecasting officer Keith Cressman said a 37-mile-long and 24-mile-wide swarm was spotted in northern Kenya that month.

The World Bank estimated that an uncontained outbreak could result in damages and losses of up to $8.5 billion by the end of this year. Ethiopia is expected to be the worst hit.

The situation is being exacerbated by political unrest in some of the countries. Officials fear that the civil war in Yemen will prevent monitoring that could prevent an additional breakout. The Guardian described one instance in which a locust-control helicopter nearly sparked a border war by accidentally crossing into South Sudan from Kenya.

Conversely, India and Pakistan have set aside their animosity, at least to a small degree, in order to cooperate in fighting the locusts.

“Swarms are often tens of square kilometers in size,” the FAO explained. The FAO warned that a swarm of just one square kilometer eats the same amount of food in one day as 35,000 people. “A swarm the size of Bamako (Mali) or Niamey (Niger) can consume what half the population of either country would eat in a single day.”

The swarms also can travel 93 miles a day making efforts to control an outbreak even more difficult. Officials warned that further rains in the region could lead to an even larger outbreak.

Coronavirus pandemic restrictions prevent many farmers from going out to their fields to battle the swarms. In addition, the pandemic has slowed the delivery of vital pesticides and equipment form other countries. Many field officers have been prevented from tracking and reporting on the infestation due to restrictions.

A wave of locusts swept through East Africa last year, returning again in 2020 in swarms estimated to be 20 times larger. The current infestation is described as the worst in 70 years.

This wave very much resembles the Biblical plague in this respect, coming as part of a wave of catastrophes that left the land of Egypt bereft of any food.