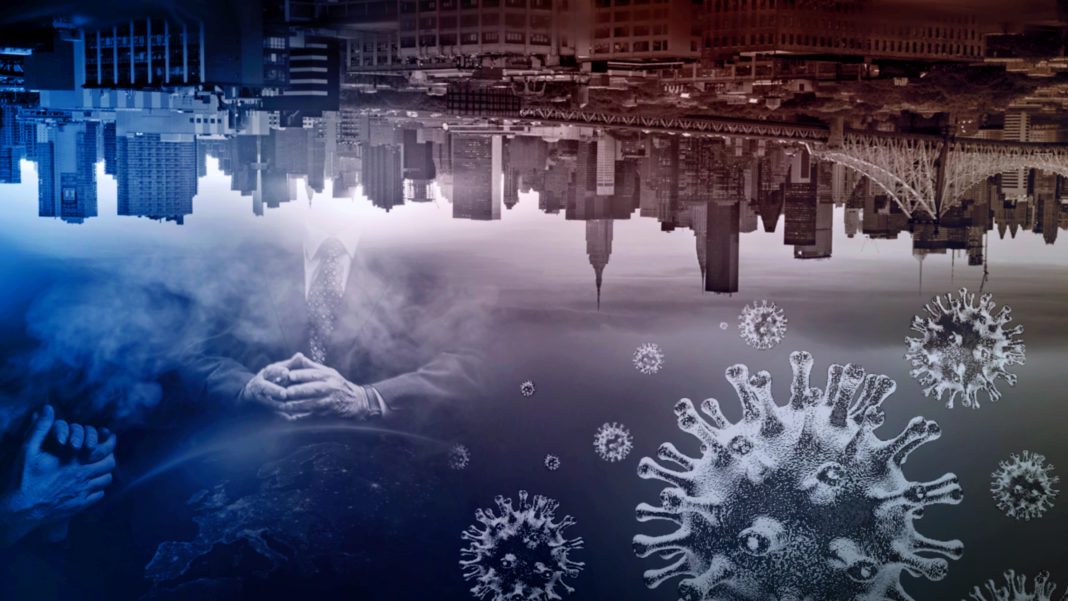 Why are we surprised? Prophecy watchers have been warning people for years that end-time events could be shocking, even before the Rapture. We have let people know that Tribulation events would cast a shadow on the Church Age as God gears up to close the Church Age. We have talked about the “birth pangs” of the last days for decades.

God doesn’t shake the entire globe very often. He did during the time of Noah and at the Tower of Babel. There was a terrible plague in the 1300s and a pandemic in 1918. Two world wars took a stunning toll.

But now an unseen enemy—a virus, no less—has created fear-driven chaos, and some unknown factors are causing people to embrace a worst-case outlook for the world. At this time, we don’t know how this plays out. It certainly has apocalyptic implications.
The world is in a set-up mode for the longing of a man-with-a-plan, sort of a Mr. Fix-It. Perhaps he is waiting in the wings. No doubt Satan has always had such a man in the shadows, as the prince of darkness does not know the date when God plans on bringing society to an end, at least as we know it. He does not know the day ordained for the Rapture of the Church.

Someone may be needed to calm the storm.

Presidential proclamations aren’t doing the trick. There is going to be a mess to clean up since the world is in a meltdown, markets are crashing, economies are tanking, people are losing all stability, and lives are being lost.

Still, there is much that is puzzling! The Swine Flu of 2009-2010 affected 61 million Americans yet produced little panic. Neither Barack Obama nor U.S. Governors stopped life as we know it back then. Sporting events went on, schools remained open, as did churches. Disneyland was not affected!

Fast-forward to 2020. Have you read the headlines on Drudge Report? Sure, journalism knows that if it bleeds it leads, but to look at various media, the sky is truly falling. It’s the end-of-the-world as we know it, even though most who get this new disease, Covid-19, will recover.

So, I have to ask if this is the crisis the globalists have waited for — or have their hand in — to make the world as one? Two men mess up their plans: Donald Trump and Benjamin Netanyahu. Recently celebrities lauded John Lennon’s song “Imagine” which visualizes the world united with no religions.

My prophecy colleague, Todd Hampson, writes, “I believe what we are witnessing with COVID-19 is part of the birth pains Jesus talked about in the Olivet Discourse. In fact, I think it is a major birth pain; as is the locust plague that is ravaging Africa and the Mideast; as is the large number of social uprisings in countries around the world; as is the increase in earthquake activity; as were the record-breaking Australian wild fires; as is—you get the picture. Birth pains increase in frequency and intensity, and they only increase until the moment of delivery.”
Todd continues, “This particular birth pain happens to be one that the entire world is feeling. Again, increased intensity. It’s also a birth pain that has shaken all earthly things. Sports, financial markets, distractions, hobbies, concerts, you name it—have all been shut down.
“Those things aren’t bad in themselves, but it’s as if God is removing any distractions for a moment in history to plead with the world again, ‘Look up! Look to me! This world is temporary. Think about eternal things. I love you. I died for you. Please don’t ignore me. Turn to me now while there is time.’”

Hampson writes, “I should also add that this is a pebble in the ocean compared to a yet-future global event that will rock the world to its core. If one rapidly spreading virus can cause this type of global disruption, can you imagine what the Rapture will do when tens of millions are removed from the world in an instant?”

Todd concludes, “That singular event will set all the end-time events of John’s Revelation into motion. There have been condensed periods of major supernatural events in the past—creation, the exodus, and the events surrounding the first coming of Jesus, culminating with the resurrection. Now, after roughly 2,000 years, we await another period of immense supernatural events which will begin with the Rapture.”

What we see playing out before our eyes is a part of the predicted scenario. Remember, everything is falling into place. These things must happen. God is shaking the nations. They have been too consumed with pleasure to pay Him the least bit of attention.

We keep getting feedback that people who would never listen before are now asking questions.

I trust that you are there with answers.