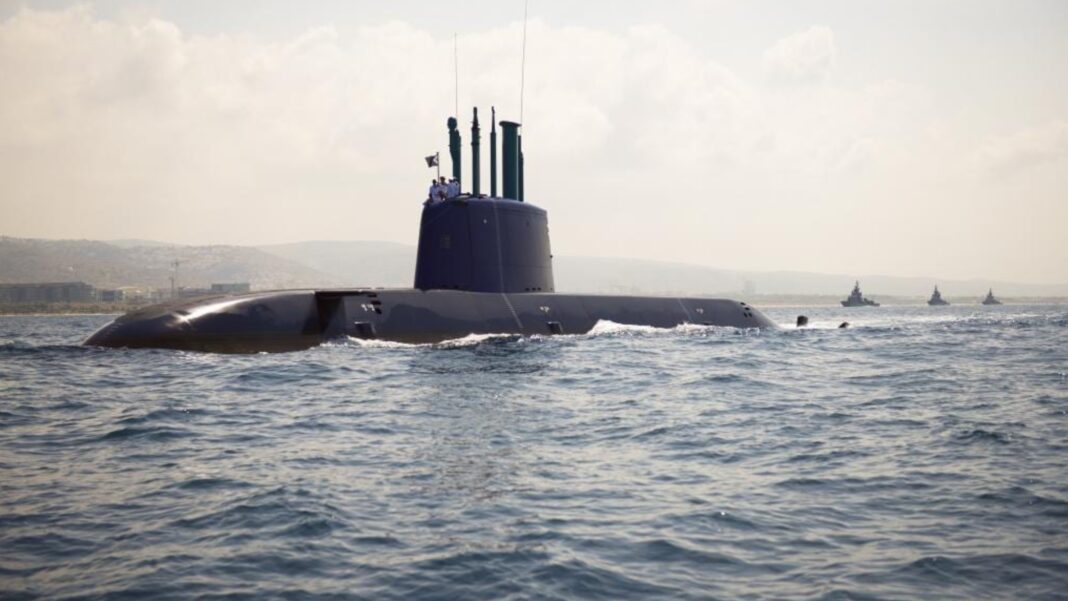 The move was approved by Egypt, according to the report, which cited Arab intelligence sources.

The submarine reportedly surfaced and faced the Persian Gulf, which lies on the other side of Saudi Arabia. The intelligence sources said the move was meant to “send a message” to Iran.

The Israel Defense Forces declined to comment, saying it does not respond to “reports of this kind.”

“Recently, we have heard increased threats from Iran against the State of Israel. If Iran and its partners, members of the radical axis [Iran, Syria, Hezbollah and Palestinian terror groups], whether in the first circle of states or the second, carry out actions against Israel, they will discover their partnership to be very costly,” Kohavi said at a ceremony honoring exemplary soldiers.

“The IDF will forcefully attack anyone who takes part, from near or far, in activities against the State of Israel or Israeli targets. I am saying this plainly and am describing the situation as it is — the response and all the plans have been prepared and practiced,” he added.

Iran has threatened to attack Israel since the assassination of its top nuclear scientist, Mohsen Fakhrizadeh, in late November, in a raid blamed on the Jewish state.

In a strikingly similar move to the reported Israeli submarine crossing of the Suez Canal, a US nuclear submarine crossed the Strait of Hormuz on Monday, in a show of force directed at Iran as the anniversary of the killing of Iranian General Qasem Soleimani by a US drone approached.

The USS Georgia can carry 154 Tomahawk cruise missiles and 66 special forces soldiers, according to a statement from the US Navy, which usually does not disclose the presence of its submersibles around the world.

The statement was illustrated with photos showing the USS Georgia at the surface, escorted by the cruisers USS Port Royal and USS Philippine Sea, in the strategic strait that Iran regularly threatens to block.

The Georgia’s presence “demonstrates the United States’ commitment to regional partners and maritime security with a full spectrum of capabilities to remain ready to defend against any threat at any time,” the Navy warned.

US military officials fear an attack by Tehran to avenge the powerful Soleimani, who was assassinated on January 3, 2020, in a US drone strike near Baghdad airport in Iraq.

The head of US forces in the Middle East, General Frank McKenzie, told journalists Sunday that Washington is “prepared to react” if Iran attacks them.

The anniversary will coincide with a reduction in US military strength in Iraq, and the Pentagon has stepped up demonstrations of force in recent weeks to deter opponents.

Two US B-52 bombers, capable of carrying nuclear weapons, flew over the Gulf region on December 10, and the aircraft carrier USS Nimitz crossed the Gulf waters at the end of November.

A rocket salvo on Sunday targeted the US Embassy in Baghdad, causing damage, but no casualties.

The attack was the third against US military and diplomatic facilities since an October truce with pro-Iran Iraqi factions ended a year-long series of attacks on foreign facilities across Iraq.