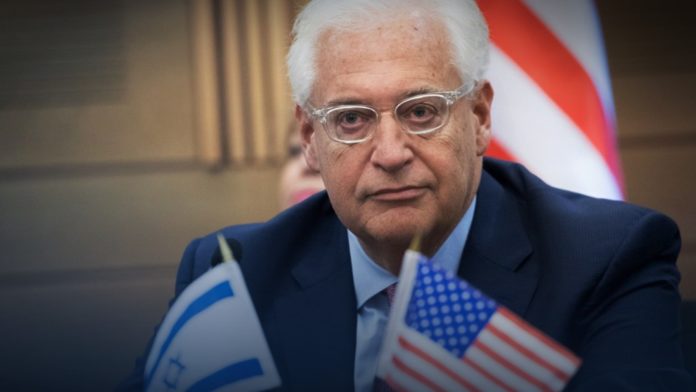 US Ambassador to Israel Friedman suggested on Wednesday that it may take time before Israel can move forward with annexation plans for the Jordan Valley and any West Bank settlements.

The comments in a briefing to reporters came amid Israeli reports that Israel’s caretaker cabinet would convene next Tuesday to vote on annexation, two days later than originally announced in order to allow time to prepare the proposal.

Friedman stressed that an Israeli-American committee to discuss the exact parameters of the ostensible annexation must be established first before Jerusalem can go ahead with its plans.

“That committee will work with all due deliberation to get to the right spot. But it is a process that does require some effort, some understanding, some calibration. We need to see the dimensions and see that it is not inconsistent with the maps,” he said.

Quoting US President Donald Trump from a day earlier, Friedman said, “the agreement that we have with the prime minister is that in exchange for Israel agreeing to freeze the territory that is allocated to a Palestinian state under the vision, in exchange for accepting our plan and moving forward… [and] form[ing] a joint committee with Israel to convert the conceptual map into a more detailed and calibrated rendering so that recognition can be immediately achieved.”

“The Israeli government will do what it’s going to do. But then the committee will form,” Friedman said.

“We will designate shortly the members of the committee from our side. We hope the Israeli government will do the same. We will be presented with the plan and the proposal and we’ll consider it as part of the agreement. And they’ll make a decision.”

“We’re cognizant that this is something that we’ll get to work on right away and we will try to get to the action real quickly,” he added.

Prime Minister Benjamin Netanyahu had initially said he wanted to bring the annexation proposal for a vote at Sunday’s cabinet meeting, but Minister Yariv Levin said earlier Wednesday that there were still several bureaucratic hurdles to leap, including “bringing the proposal before the attorney general and letting him consider the matter.”

A Likud official speaking on the condition of anonymity appeared to pour additional cold water on the possibility of an imminent annexation vote, saying “the PMO is working hard to prepare the [sovereignty cabinet] decision. This is complex work that includes maps and aerial photographs. We hope to complete it as soon as possible.”

It is unclear whether Attorney General Avichai Mandelblit will green light such a move being made by a transitional government, which is largely limited from carrying out irreversible decisions.