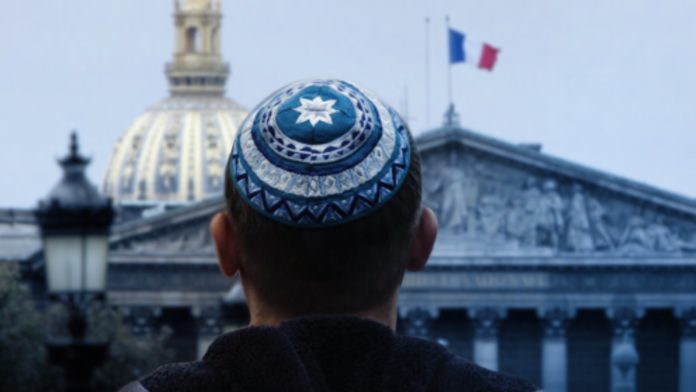 Anti-Zionism is a form of antisemitism, the French National Assembly determined on Tuesday, voting on a resolution calling on the government to adopt the International Holocaust Remembrance Alliance’s definition of antisemitism.

The motion passed with 154 in favor and 72 opposed in the parliament’s lower house. It was proposed by lawmaker Sylvain Maillard of LREM, President Emmanuel Macron’s centrist party.

“For some years now, France, the whole of Europe, but also almost all Western democracies are facing a rise in antisemitism,” the resolution states. “Anti-Zionist acts can at times hide antisemitic realities. Hate toward Israel due to its perception as a Jewish collective is akin to hatred towards the entire Jewish community.”

The IHRA definition says some forms of hatred against Israel are antisemitic, such as comparing Israel to Nazi Germany, claiming Israel’s existence is a racist endeavor, and using classic antisemitic claims and symbols to characterize Israel and Israelis.

Maillard’s resolution was highly controversial and debated in the French media in recent weeks. A letter from 39 organizations penned in October said that antisemitism should not be defined separately from other forms of racism and that the motion stifles freedom of expression for supporters of Palestinians and critics of Israel.

Meyer Habib, a lawmaker from the Union of Democrats Party representing French expats in several countries, including Israel, spoke in support of the resolution in the National Assembly on Tuesday.

“The French policy to fight antisemitism is a failure,” Habib said. “There is an outbreak of antisemitic assaults. Twelve French citizens were murdered since 2003 because they were Jewish. Half of the racist incidents in France are against Jews, even though [Jews] are less than one percent of the population.”

“Israel is the Jewish people’s only assurance of safety,” he added.

Anti-Zionists are not just critics of Israel, they are obsessed, Habib explained. They use anti-racist and anti-colonialist rhetoric to try to erase Jewish identity.

“The new antisemitism is flourishing on the background of hatred of Israel, Islamism and conspiracy theories…I am concerned for Jews but I am mainly worried about France…Do I need to remind you of the slogans of the yellow vest [protesters]? ‘Macron equals Rothschild equals Zion,’ ‘Macron is a whore of the Jews,’…Wake up!” Habib stated.

Earlier this year, Macron called anti-Zionism “one of the current forms of antisemitism,” following an attack on French Jewish philosopher Alain Finkelkraut by participants in the yellow vest anti-government protests. The demonstrators called him a “dirty Zionist” and told him to “go back to Tel Aviv.”