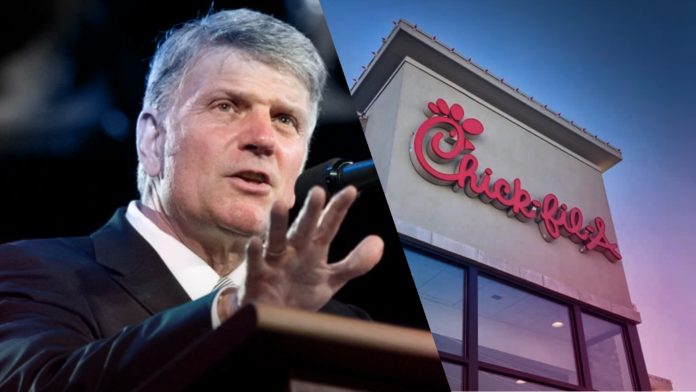 Franklin Graham took to Facebook to comment on the mounting criticism Chick-fil-a is facing about their charitable donations and warns against the dangers of Christian companies drifting to the Left:

Chick-fil-A has been in the news a lot, and every day it seems there’s a new article about their charitable giving. There has been a lot of concern and criticism, and maybe rightly so.

For Christian schools, businesses, and organizations, there is always a danger of drifting to the left. It is my sincere hope that Chick-fil-A will not allow that to happen.

With the majority of corporate America caving to the LGBTQ agenda, Chick-fil-A has stood against the tide—with people of faith supporting them all the way.

What can we do now? I would encourage Christians everywhere to pray for Dan Cathy, his brother Bubba, and the family as they have some important decisions to make. It’s their company, they can do what they want.

But my prayer is that God will lead and direct them, and that they will continue to honor their late father Truett Cathy’s strong stand for biblical values–all to the glory of God!

While Chick-fil-A is one of the few restaurants closed on Sunday to honor God, what if we make today “Pray for Chick-fil-A Day?” Will you join me in praying?

Rev. Franklin Graham - September 11, 2020
We are at the mercy of a generation that seems to have no respect for God’s standards and no awareness of His redeeming love.

‘We Ask That You Would Unite Our Hearts’: Franklin Graham’s Prayer...

‘Our Only Hope For This Country is God’: Franklin Graham to...