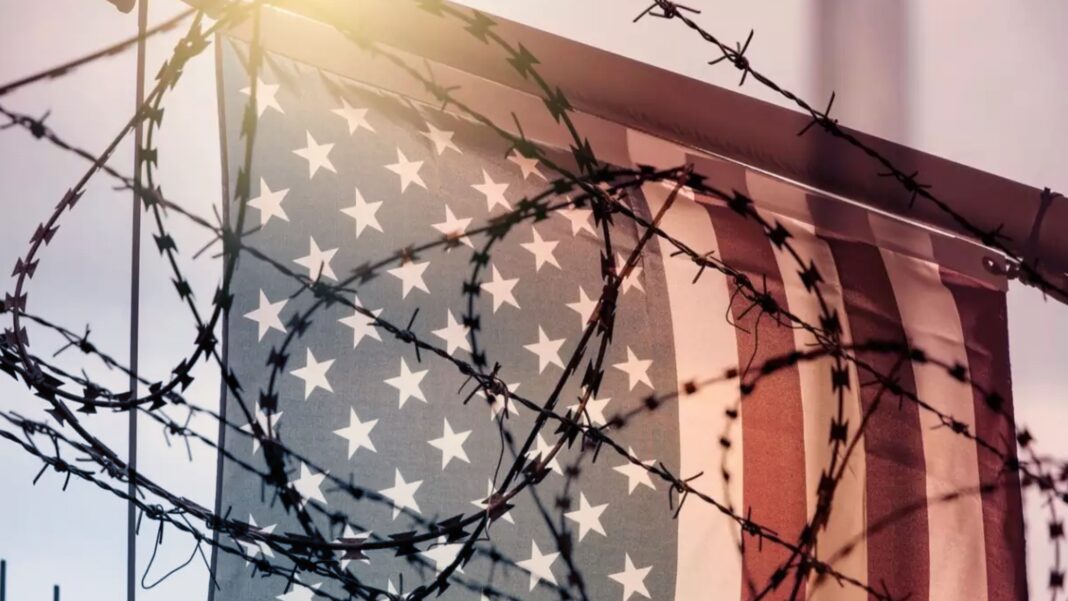 The Pelosi, Schumer, Sanders, AOC, Soros, Biden, Harris Democrats now want to turn the nation’s Capital into a fortress and build a wall. The irony is they refuse to finish building a wall on our southern border, but they’ve now found a way to manufacture another false flag. They are using the events on January 6 to spread the narrative that American citizens who oppose their awful policies are dangerous.

The razor-wire fence around the Capitol in Washington D.C. is a sobering reminder of what’s happening to our freedom in America. Big government is separating from we the people.

The Left is lobbying for a permanent Capitol wall. More Democrats have recently suggested Trump supporters be re-educated or deprogrammed. A few weeks ago, the New York Times published one of many alarming articles. This one was titled, “The Capitol Insurrection Was as Christian Nationalist as It Gets.”

Socialists and globalists have already convinced people that Christianity is intolerant and patriotism is divisive. But we must not allow the left to turn our love for God and respect for our country into something shameful, wrong, or dangerous.

Missouri Senator, Josh Hawley recently shared his concerns about what the left is laying the groundwork for to divide Americans and use the Capitol breach to frame all Christians, conservatives, Republicans, and freedom-loving citizens as domestic terrorists or right-wing extremists.

“I’m concerned that they continue to treat the January 6 catastrophe, that criminal riot as an excuse to seize power, to control more power, to step on people’s Second Amendment rights to take away their First Amendment rights.” Now, we’re hearing about a domestic war on terror. I mean, what’s that going to be? An excuse to go rifle through the e-mails and bank statements and personal messages of law-abiding Americans? I mean, this is very, very frightening stuff. And what Pelosi and the Democrats are doing here trying to consolidate power, it’s dangerous.”

The left is known for never letting a good crisis go to waste and this is no different. But to suggest they need a military-style barrier around the U.S. Capitol is a bit much – even for the Pelosi power elites.

According to reports there are 7,000 National Guard soldiers and airmen who will stay another month in the city, and 5,000 troops will remain a the Capitol indefinitely. How do they justify this political theater and taxpayer spending? In part, the Democrat media covers for them.

There was never a threat of violence or lawlessness last year at hundreds of Trump MAGA rallies across the country, but it seems the left conveniently ignores the mayhem of Biden Harris voters looting and burning private and public buildings in Washington, D.C., and in many other U.S. cities throughout the summer!

Dozens were killed, hundreds of police officers injured, and about $2 billion dollars of property damage was done. Attacks on federal buildings in Portland cost $2.3 million. And the Democrat media described the chaos as “mostly peaceful protests.” And yet, they harshly criticized President Trump at the time for deploying federal agents to reinforce outnumbered police forces in D.C.

In an op-ed last week, Family Research Council’s Tony Perkins, whose office is near the Capitol building, reminded people about the rioters in D.C. who lit fires and taunted police officers every night leading to orchestrated violence. The left also ignores the mob that surrounded and attacked Sen. Rand Paul, his wife, and other Republicans following President Trump’s RNC speech.

Most of us remember property owners responding to rioters smashing windows and looting stores by boarding up doors and windows with plywood and hiring security as many businesses did in cities across the U.S. We also remember the praise from most Democrat leaders for those expressing their frustrations and “exercising their First Amendment Rights.”

Tony Perkins also made a very interesting observation. He explains:

The anticipation of leftist violence after Election Day from a Trump reelection victory led many establishments to board up. However, Joe Biden was elected and the boards started coming down. The actions of property owners suggest they sensed the left was satisfied and would not return to their burning and looting. However, if you walk by the Capitol [today], you’d think the threat is greater than ever.

Actually, you can’t even get close to the Capitol. Eight-foot fencing topped by razor-wire cordons off streets up to four blocks away. Around the clock, National Guard members in military fatigues with automatic weapons stand at 20-yard intervals. The Pentagon is now projecting that the federal government will spend $483 million in security costs at the U.S. Capitol. It’s a scene worthy of a third-world dictatorship, not the United States of America.

Welcome to Checkpoint Pelosi’s latest power grabbing stunt. Most Americans aren’t buying it, and many see through the hypocrisy of the double standard Democrats.

These people want a very different America. Beware the globalist infiltration in government and the social justice infiltration in the church. The enemy is within: enemies of God, biblical values, truth, and our freedoms. To them, this is about a Marxist coup.

But Democrats have forgotten that the U.S. Congress is the People’s House. Under the First Amendment, Americans have had and always should have the right to enter the U.S. Capitol, to visit their representatives and senators, and to petition the government.

Cheryl Chumley writes for the Washington Times and warns that the next stage of the left’s agenda is to categorize and take down Trump supporters, patriots, Christians, and conservatives by condemning Christian Nationalism. Be watching for this. Don’t let the left redefine this phrase. Chumley stated:

It is not a sin to be proud of America and want the country to prosper, but our freedoms are slipping away and forces of darkness are advancing. We must stay engaged, friends because we are in a truth war. Let’s keep raising awareness, stop the redefining of words and deconstruction of our history.