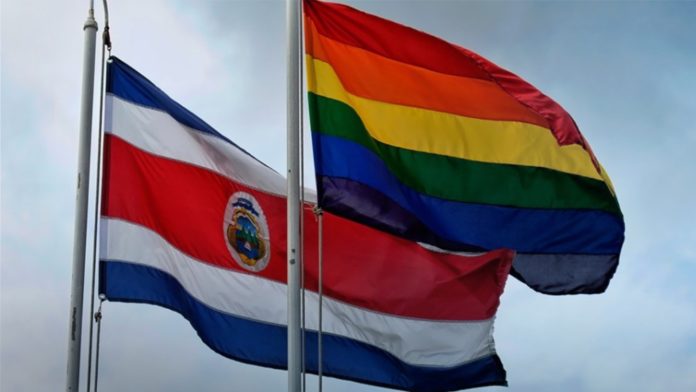 Romans 1:28,32 KJV – “And even as they did not like to retain God in their knowledge, God gave them over to a reprobate mind, to do those things which are not convenient… Who knowing the judgment of God, that they which commit such things are worthy of death, not only do the same, but have pleasure in them that do them.”

Though a group of more than 20 legislators tried to delay the ruling being implemented for another 18 months, they fell short.

Shortly after same-sex marriage became legal, a lesbian couple became the first to utilize the new law, holding an outdoor ceremony that was broadcast live and officiated by a notary wearing a face mask.

“Today we celebrate freedom, equality and democratic institutions,” President Carlos Alvarado, who won the country’s 2018 election, wrote in a tweet translated from Spanish. “May empathy and love be the compass that allows us to get ahead and build a country where all people fit.”

However, according to the Family Research Council, “… It wasn’t really Costa Ricans who made it happen. Instead, Costa Rica became—like the United States five years ago—the victim of a multi-layer attack of judicial activism.”

Jose L. Gonzalez, president of Semilla, a Latin American Christian leadership development organization, and a leader in the Iberian-American Congress on Life and Family, told the FRC in an interview: “LGBT activists in the Supreme Court, in the Congress of Costa Rica and in the Inter-American Court of Human Rights maneuvered to legalize same-sex marriage in that country.”

According to the FRC, Gonzalez said that the LGBTQ lobby blocked a compromise proposal, “while the coronavirus crisis interfered with the proceedings.” Finally, the country’s Supreme Court imposed same-sex marriage upon the nation.

FRC’s Peter Sprigg wrote that “the judicial tyranny imposed upon Costa Rica began with a decision of the Inter-American Court of Human Rights in 2018. The court is charged with enforcement of the American Convention on Human Rights, an agreement among some members of the Organization of American States. … But just as in American courts, there is a tension between competing judicial philosophies. The more conservative view favors judicial restraint, while a more liberal view favors judicial activism.”

Many Costa Ricans are opposed to same-sex marriage and the new law, which is reflective of a country with a strong Catholic tradition that has seen a growth in the number of evangelical churches in recent decades.