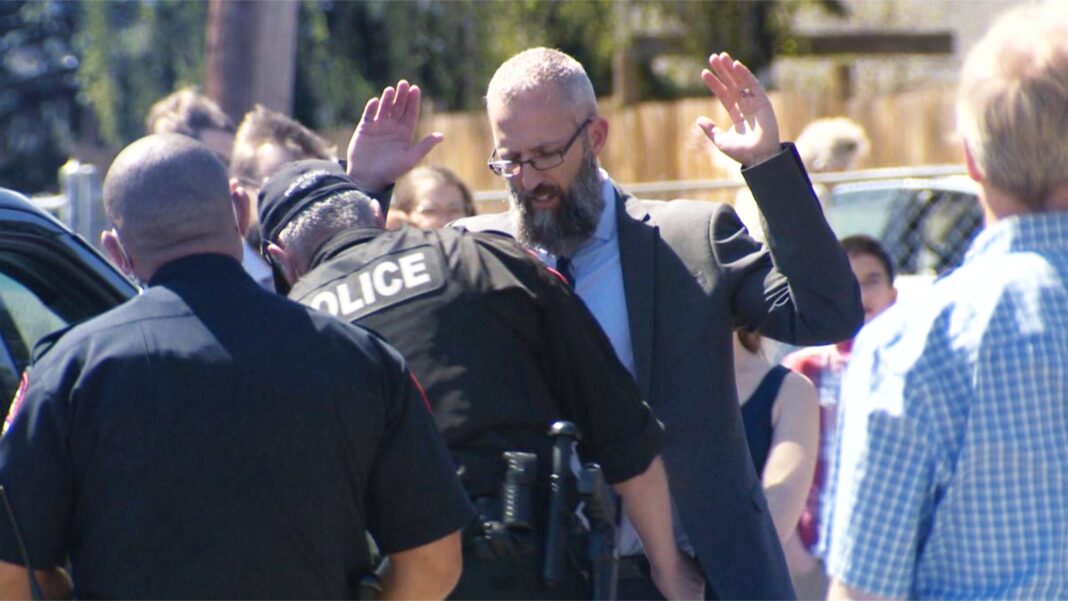 Pastor Tim Stephens was arrested on Monday afternoon on new charges, after Fairview Baptist Church gathered for underground worship for the second week in a row since their church was effectively seized by Alberta Health Services last Saturday.

Alberta authorities were forced to drop other charges against Pastor Tim last month, after discovering that Alberta Health Services never served Pastor Stephens with the court order he was accused of having violated, a requirement under the order. That effectively ended the case against Pastor Tim, but he will now be facing another legal battle.

Over the weekend, an ever-growing crowd gathered at the undisclosed location and shared the word, sang songs of praise and heard Pastor Tim preach.

As worship progressed, a police helicopter discovered the gathered congregation.

It is unclear if police were actually searching for the group or simply happened upon it, as the helicopter was significantly north of the location of worship and continued towards the city. It wasn’t until several minutes later that the helicopter returned and completed repeated passes overhead.

Minutes later, police vehicles were seen circling the location, but they never moved in to interrupt worship or make arrests.

Ironically, all efforts to suppress worship by Alberta Health Services, whether at Pastor Artur Pawlowski’s or Pastor Tim’s church have only served to significantly bolster church attendance. As public health restrictions continue to be relaxed, these churches are not facing defeat at the hands of overreaching officials, quite the opposite — they are stronger and larger than ever before.

Despite worship continuing, Pastor Tim was arrested in front of his family on Monday. He is fortunate to be represented by the Justice Centre for Constitutional Freedoms, who will be working for his immediate release.

This latest arrest comes after Alberta Premier Jason Kenny, in a Q&A, scolded Pastors who have broken his lockdown orders. The Premier, when asked why he was arresting Pastors, falsely asserted that houses of worship have been hotbeds for the coronavirus and that church leaders who “flagrantly violated the law” have “recklessly disregarded” Biblical mandates.

Kenny further claimed that churches who open their doors have violated a “core tenant” of their Christian faith, which is to protect the sanctity of life. In order for the premier to have made that comment, of course, he had to “flagrantly disregard” the actual number of COVD cases, recoveries, and deaths.

Here is what Scripture actually says:

The wife of Pastor James Coates of GraceLife Church (who was the first Alberta Pastor arrested) put out a statement on social media after the government took control of their church building, forcing them as well to worship “underground”:

This is what happens when you have freedom of religion in a free and democratic society: they jail your pastor for freely opening the doors of the church and serving Christ’s sheep and hurting people. Now they’ve chained the doors of GraceLife Church enclosing in chain link fence. This is all under the guise of a health order.

Too bad the Church isn’t a building, it’s a blood-bought people – Christ has and will prevail. We have an enemy and that enemy has been defeated by the death and resurrection of Christ. For all those who find satisfaction in this – you cannot stop the gospel. The name of Jesus Christ will go forth with even more power and conviction. The Word of God will sound out across this nation accomplishing all the work God has ordained to glorify Himself.

I pray for all the pastors and Christians that still think this is about a virus and health order. Clearly, our Charter and criminal code mean nothing as long as the government can come up with a good enough story to disregard it. God have mercy on our nation. I pray for their souls. They are clearly under Your judgment.