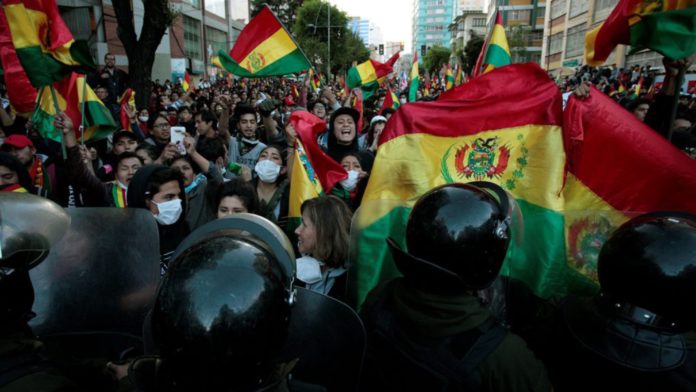 Morales had been set to finish his third term in January but had faced weeks of protests following an election that he won but which was dogged by accusations of vote rigging. He has blamed his downfall on a coup after security forces withdrew their support for him.

The interim government of President Jeanine Anez, a former opponent of Morales who was the highest-ranking official when he and his vice president fled to Mexico, has since swung Bolivia’s politics sharply to the right.

She has strengthened the standing of the religious right, resumed strong ties with the United States and Israel, and sent hundreds of Cuban doctors and Venezuelan diplomats home.

Her government has also set up police units to conduct counter-terrorism operations. TV footage broadcast on local media have showed police in face masks with guns in training sessions.

“They’re tough and not messing around,” Murillo said of the units. “We’re going to keep preparing them.”

Murillo said several countries had helped train the police and that he has asked Israel for support as well.

“We’ve invited them to help us. They’re used to dealing with terrorists. They know how to handle them,” Murillo said of the Israelis. “The only thing we want is to bring peace.

“Last week, the government struck a series of deals with protest leaders to “pacify” Bolivia after clashes between security forces and Morales’ supporters killed some 30 people.

Murillo accused Maduro, a close ally of Morales, of financing unrest across the region, without providing evidence. Murillo said he plans to travel to the United States to set up “connections” for exchanging information.

Maduro’s government has dismissed the charges as baseless.

Murillo also called it “worrisome” that former leftist Argentine President Cristina Fernandez de Kirchner was set to return to power as vice president next week.”Unfortunately, the Argentine people elected her. That’s why all of us democratic countries must be on alert,” Murillo said.