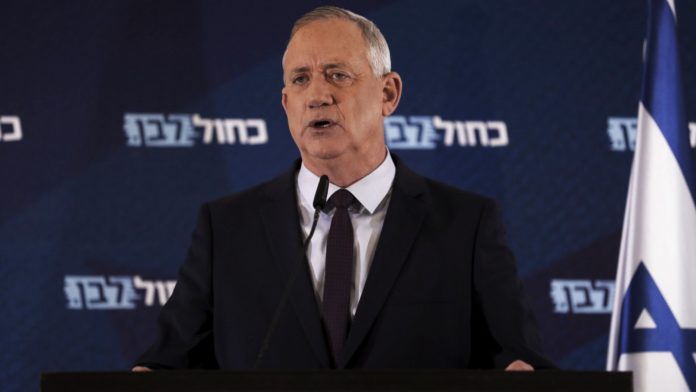 In a dramatic turn of events, the Blue and White Party that served as the alternative to Prime Minister Benjamin Netanyahu in the March 2 election, broke up  on Thursday after party head Benny Gantz decided to enter Netanyahu’s government.

The three parties that made up Blue and White – Gantz’s Hosen L’Israel, Yair Lapid’s Yesh Atid and Moshe Ya’alon’s Telem – all went in different directions. Hosen L’Israel is joining the government, Lapid will head the opposition and Telem will split up, with Ya’alon on the outside and MKs Tzvi Hauser and Yoaz Hendel in.

Yesh Atid and Telem formally asked the Knesset to split off from Hosen L’Israel and keep the name Blue and White for the two parties together. Yesh Atid MKs wished their former colleagues good luck as they left the party’s whatsapp group.

“Gantz decided to crawl into Netanyahu’s government,” Lapid said, saying that Gantz did not succeed in deposing Netanyahu or keeping the party together.

There will be a rotation in the Prime Minister’s Office between Prime Minister Benjamin Netanyahu and Gantz. Netanyahu’s allies will start off as finance minister and Knesset speaker. Gantz will serve as foreign minister, MK Gabi Ashkenzi defense minister and many other MKs from Hosen L’Israel will be ministers.

The split happened after Gantz decided that he would be the candidate for interim speaker of the Knesset after progress in coalition talks with Likud. Appointing Gantz as speaker gives time for the coalition talks.

Gantz was elected in a vote according to new party lines of 74-18 with Yesh Atid, Labor and Yisrael Beytenu MKs boycotting.

The Likud objected to Blue and White MK Meir Cohen becoming Knesset speaker, because he is from the Yesh Atid party in Blue and White that was expected to stay out of a national unity government initially led by Netanyahu. Lapid had an agreement with Gantz that the speaker must come from his party. A meeting of the cockpit of leaders in Blue and White ended in what has been described as the worst ever fight among the leaders.

Likud faction chairman Miki Zohar had warned that if Cohen becomes Knesset speaker, coalition talks would end immediately. He said he was speaking for Netanyahu when he said it. Likud officials noted that in the plan Netanyahu presented on Saturday night, the Knesset speaker could come from the party of the prime minister and then shift to the other party when there is a rotation.

The idea of Gantz himself temporarily serving as Knesset speaker was immediately rejected by Yesh Atid, Yisrael Beytenu, Meretz and the Joint List. But Likud and its satellite parties will vote for him.

“If Gantz becomes the candidate for Knesset speaker in order please Likud and form a unity government, we will vote no,” Joint List faction chairman Ahmad Tibi told a meeting of the Knesset Arrangements Committee.

In the plenum, Labor MK Merav Michaeli asked Gantz and Ashkenazi why they “put the entire country through this entire mess when they could have been ministers for Netanyahu all along.” She said they should have learned from what happened to politicians who relied on Netanyahu’s promises in the past, like Finance Minister Moshe Kahlon and Yaalon.

“You wanted to be Yitzhak Rabin but you ended up like another former IDF chief of staff Shaul Mofaz, a nice man but a caricature of a politician who gave into Netanyahu and whose career ended shortly afterward,” she said.