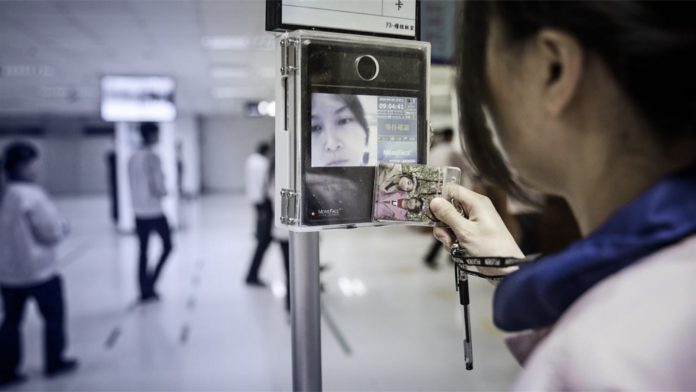 The Chinese regime announced a new rule which requires residents to pass a facial recognition test in order to apply for an internet connection via smartphone or computer.

The rule will be implemented from Dec. 1, 2019. In addition, no cell phone or landline number can be transferred to another person privately.

This is an upgraded restriction after the Chinese Ministry of Industry and Information Technology (MIIT) required all applicants to present a valid ID and personal information to register for a cell phone or a landline number since January 2015.

MIIT published the new rule on its official website and distributed it to all telecom carriers on Sept. 27, which includes three main requests.

First, all telecom carriers must use facial recognition to test whether an applicant who applies for internet connection is the owner of the ID that they use since Dec. 1. At the same time, the carriers must test that the ID is genuine and valid.

Second, all telecom carriers must upgrade their service’s terms and conditions and notify all their customers that they are not allowed to transfer or resell their cell phone SIM card to another person by the end of November 2019.

Third, telecom carriers should help their customers to check whether there are cell phone or landline numbers that don’t belong to them but registered under their names since Dec. 1. For unidentified numbers, the telecom carries must investigate and close the lines immediately.

MIIT said in the notice that it will arrange for supervisors to check each telecom carrier’s performance, and will arrange inspections to make sure all carriers will follow the rule strictly.

“The reason why the Chinese regime asks people to register their real identities to surf the internet is because it wants to control people’s speech,” U.S.-based commentator Tang Jingyuan told The Epoch Times on Sept. 27.

Authorities arrested hundreds of Chinese people in recent years because they posted a topic that the regime deemed sensitive, including the most recent Hong Kong protests.

“MIIT’s new rule on using facial recognition to identify an internet user means the government can easily track their online activities, including their social media posts and websites they visit,” Tang said.“Then these people become scared of sharing their real opinions online because their comments could anger the authorities and they could get arrested for it.”

In cities and public spaces such as train stations, airports, government buildings, and entrances of museums, police use smart glasses to check each passerby’s identity and whether they have a criminal record.

On the streets, millions of surveillance cameras capture and track people’s movements.

At crosswalks, facial recognition systems record jaywalkers, who are then fined 20 yuan ($2.81), and docked points on their social credit score. The Chinese regime’s social credit system assigns each citizen a score of social “trustworthiness.” A person with a low social credit score may not be allowed to board a train or airplane, or their child may not be admitted to a reputable school.

Inside classrooms, facial recognition technology monitors each student and reports their actions to the teacher and parents.

Even inside public restrooms, tourists and residents have to use facial recognition system to get toilet paper.

According to the latest report of U.S. based market research firm IDC, China spent $10.6 billion on video surveillance equipment in 2018, and spending will reach $20.1 billion in 2023. 64.3 percent of the spending in 2018 accounted for surveillance cameras.

IDC reported on Jan. 30 that it predicted China would have 2.76 billion surveillance cameras installed in 2022.