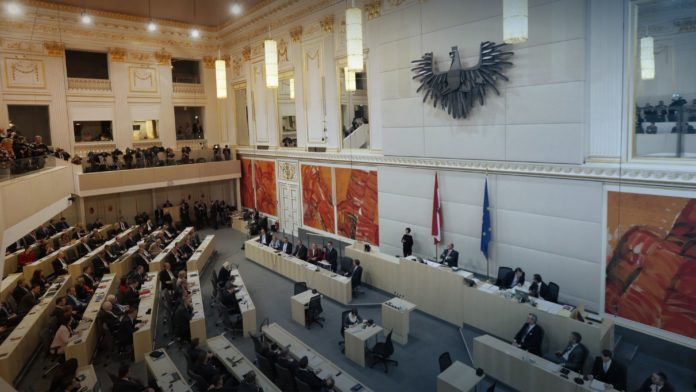 Austria’s national parliament unanimously passed a resolution on Thursday condemning the Boycott, Divestment and Sanctions campaign as antisemitic, and urging that the anti-Israel movement not be supported.

The Austrian Member of the European Parliament Lukas Mandl said: “The Austrian parliament’s historic decision today to condemn any boycotts of Israeli goods shows that Austria stands on the side of Israel – not half-heartedly, but with full conviction. Israel is Europe’s key partner in the Middle East for security, economic cooperation and job creation, and shares our fundamental values of the rule of law and democracy.

“Austria’s partnership with Israel is a shining example for other European countries to follow,” he continued. “But we need to go even further and set a positive agenda with the Jewish state, both in Vienna and in Brussels. We must urgently hold an EU-Israel Association Council which inexplicably hasn’t been convened since 2012.

“What’s more, the Association Agreement facilitating free trade with Israel needs to be updated and deepened,” added Mandl, who is the Chair of the Transatlantic Friends of Israel (TFI) group in the European Parliament.

According to a statement from the TFI, the group “welcomed the Austrian parliament’s condemnation of the boycott, divestment, and sanctions (BDS) movement against Israel, urging the Austrian government and other EU member states to heed the resolution’s call. Supported by all political groups, the resolution asked the Austrian government to fight all forms of antisemitism, including Israel-related antisemitism, denounce the BDS movement, and prohibit any state funding or use of state facilities by BDS or other antisemitic groups that question Israel’s right to exist.”

In 2016, The Jerusalem Post first reported on a number of Austrian banks that provided accounts to Austrian BDS organizations with links to Palestinian terrorists from the Popular Front for the Liberation of the Palestine. After the Post exposes, the banks, Erste Group and BAWAG, terminted the accounts with the organizations BDS Austria and the Austrian-Arab cultural center.

Israel’s Foreign Minister Israel Katz said it was a “decisive decision that could serve as an example for other European and world countries, and I urge countries and parliaments to follow Austria’s lead and adopt similar decisions.”