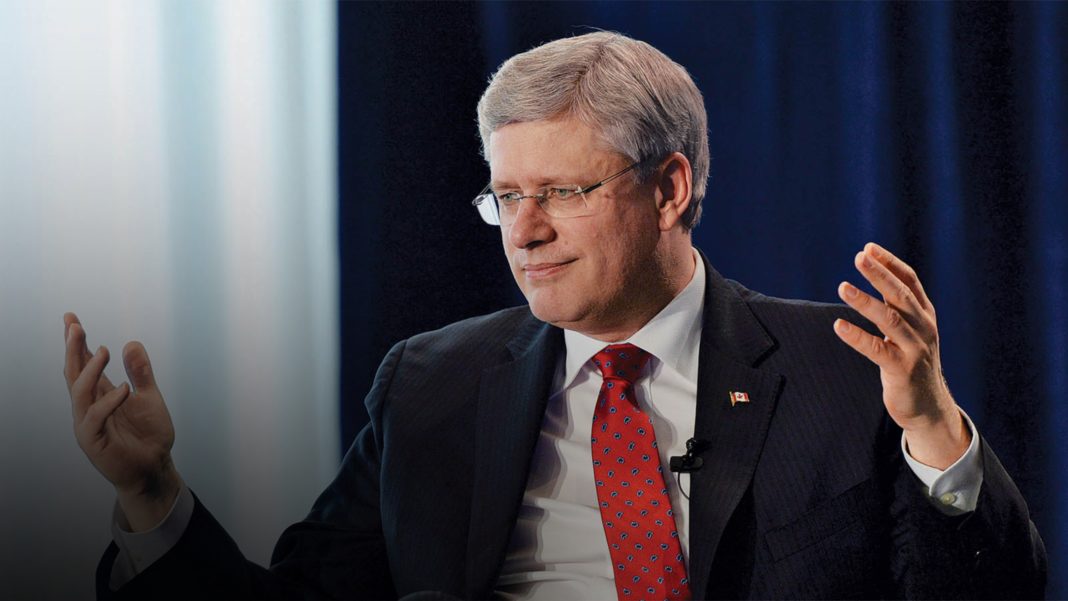 CBC’s and CTV’s newsrooms published rather important “clarifications” to online news stories on Tuesday afternoon, the main point of which was that Stephen Harper never uttered the phrase “regime change” at an international policy gabfest in New Delhi. The topic was Iran and its shooting down of a Ukrainian airliner with 176 souls aboard, the vast majority of whom were heading to Canada, and 57 of whom were Canadian citizens.

These are indeed clarifying. Many in the journalism industry would suggest the problem called for the more serious “correction,” however. As everyone involved in the story, the headlines and the associated tweets will have known, “regime change” has a very specific and very portentous meaning. The Cambridge dictionary defines it as “a complete change of government, especially one brought about by force.” Collins, if you prefer, says it’s “the transition from one political regime to another, especially through concerted political or military action.”

Other dictionaries broadly agree, as do most normal people. Thus roughly 100 per cent of people who saw the headline and didn’t read the article — which is most people, and about 98 per cent of Twitter users — assumed Harper had advocated military intervention in Iran. Many vented their fury at him accordingly.

Harper did not advocate military intervention in Iran, or indeed any particular intervention whatsoever. Despite describing Iran (accurately) as an “anti-Semitic state” premised on “religious fanaticism and regional imperialism” that is standing resolutely in the way of cooperation between other Middle Eastern nations, Harper didn’t even advocate “a complete change of government.”

“I do believe we need to see a change in Iran if we are going to see peace in the Middle East,” he said.

“Without a change in the nature of the government of Tehran,” he said, “the Middle East will continue to be in turmoil.”

He said he hoped the furious protests in Iran might nudge the country toward “a better trajectory.”

These are perfectly anodyne statements. Who doesn’t want the Iranian regime to alter its behaviour?

Clarification or correction? I would say this calls for something more like “colossal embarrassment necessitating deep introspection.”

The root problem, I think, is that so much of Canadian politics is purely for show. We are a sparsely populated, not very powerful nation where the differences between the two major federal parties are remarkably small — and thus so are the stakes. It requires special measures to keep people interested, as much for the media as for politicians.

In the last campaign journalists created endless scandal out of Conservative leader Andrew Scheer’s perfectly reasonable and simple position on abortion, spent most of a morning press conference in Winnipeg asking if it was appropriate for Scheer to be there in light of area flooding, and asked Scheer 14 times at a press conference in Toronto whether his campaign had hired a certain consulting firm to dig up dirt on Maxime Bernier.

The big story on that last occasion? Scheer refusing more than a dozen times to say whether his campaign hired a consulting firm to dig up dirt on Maxime Bernier. (“And so what if it did?” went largely unanswered.)

That’s how the big outlets like CBC and CTV make the sausage of the day, and it’s understandable. They do great investigative work, but the beast needs feeding not just every day, but all day every day. During the campaign I would watch colleagues set up for live hits in various parking lots and back yards and sometimes even on the campaign bus, and imagine them speaking the truth: “I’m here in Delta, B.C. and there’s f–k-all to report. Back to you, Kent.” But the viewers must never know. They need drama, as weak as it might be. I can easily imagine how that principle transformed “a changed regime” into “regime change.”

The real problem with this reporting regime is when it’s applied to things that actually do matter. There are serious potential consequences to telling the world that Stephen Harper thinks, in essence, that we should declare war on Iran with an eye to bouncing the ayatollahs. Harper’s successor and his government are in the midst of an extremely delicate and frankly improbable operation to find out precisely what happened the morning of Jan. 8 in the skies above Tehran and seek justice for the victims and their families. Those families don’t deserve fake news about a warmongering former PM, and I’m sure our diplomats would prefer members of the unchanged Iranian regime didn’t come across it either.

This isn’t a Canadian federal election. It’s real life, and needs to be covered as such.