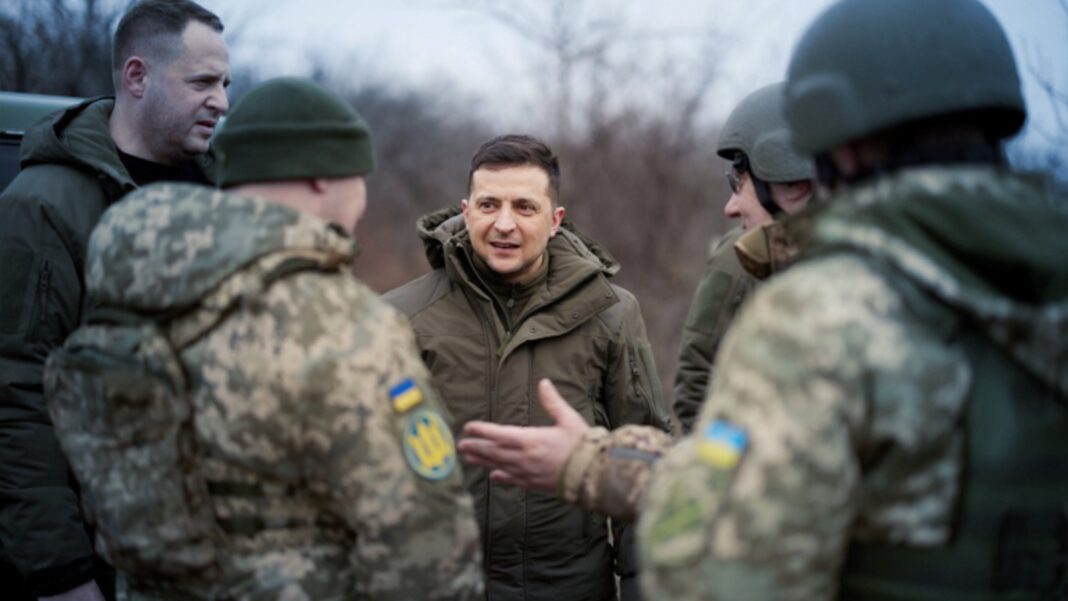 A top Russian official has warned that Moscow could intervene to help Russian-speaking residents in eastern Ukraine if Ukraine launches an all-out assault on separatists there.

Russian-backed separatist rebels and Ukrainian troops have been clashing in the east of the country.

Russia has also been building up troops on the border with Ukraine.

“Everything depends on the scale of the conflagration,” he said. He is deputy head of Russia’s presidential administration.

He also warned that an escalation could mark the “beginning of the end” for Ukraine – “not a shot in the leg, but in the face”.

The Ukrainian military says one of its soldiers was killed on Thursday by shooting from the separatists. The rebels used machine-guns, grenades and mortars several times and Ukrainian forces fired back, the military was quoted as saying.

“However, this does not mean that our country is being encircled. The situation is under control.”

Earlier the rebels said one of their fighters was killed when Ukrainian troops fired mortars at a village on the outskirts of the city of Donetsk.

The United States and Germany have both expressed concern at the increase in tensions.

Why are Ukraine-Russia tensions rising?

Russia has been increasing the number of troops at the Ukrainian border, but at the same time maintains that they should not be seen as a threat.

White House press secretary Jen Psaki said Russian troop numbers there were the highest since 2014, when the conflict in eastern Ukraine began. She described the situation as “deeply concerning”.

Russia has not detailed troop numbers, but the Ukrainian military asserted at the end of March that some 20,000 Russian troops had been moved towards Ukraine’s border. Video has emerged on social media of Russian trains moving heavy weaponry, apparently towards the region.

For months there have been sporadic clashes between Ukrainian troops and the Moscow-backed rebels in the Donbas region, violating a fragile ceasefire daily.

Ukraine says 25 of its troops have been killed in the conflict zone so far this year, and 50 died in the whole of last year.

Ukrainian President Volodymyr Zelensky visited the region on Thursday to see “the locations of the escalation” and “be with our soldiers in the tough times in Donbas”.

She urged Russia to “de-escalate tensions” by pulling troops back, while Mr Putin accused Ukraine of inflaming the situation in the east.

What else did the Kremlin official say?

In Moscow, Mr Kozak likened the current situation of the separatists to Srebrenica, the town in Bosnia-Herzegovina where 8,000 Muslim men were killed by Bosnian Serb forces in 1995.

“If, as our president says, there is a Srebrenica there, we shall probably have to come to their defence,” Mr Kozak said.

President Putin first suggested in 2019 that Russian-speaking residents might suffer a Srebrenica-like massacre if Ukraine regained full control of Donbas without guarantees. He has always made it clear the Russian state reserves the right to defend ethnic Russians abroad, and in 2019 signed a law making it easier for people in separatist areas to obtain Russian passports.

There is no sign that Ukraine is preparing any such Bosnian Serb-style “ethnic cleansing” campaign.

Mr Kozak suggested the rebels could hold their own for now against Ukrainian forces, as they consisted of “battle-hardened units”.

What’s the background to all this?

The roots of the conflict go back to March 2014, when Russia annexed the Ukrainian region of Crimea. Pro-Russian President Viktor Yanukovych had fled the Ukrainian capital Kyiv in February, after massive street demonstrations and clashes.

Russia’s military intervention sparked a major rift with Western nations, prompting the European Union and the US to impose sanctions on Russia.

A month later, Russian-backed rebels in the mainly Russian-speaking Donbas seized much of the Donetsk and Luhansk regions.

Western governments and Nato accused Russia of sending regular troops over the border into Ukraine, but Russia maintains any Russian fighters there are “volunteers”.

Ukraine’s President Zelensky came to power promising to bring about peace, and a ceasefire was signed last July. Both sides have since accused each other of violating it.

The conflict is estimated to have killed 14,000 people.