Iran and Turkey, along with Russia, have worked closely together in Syria, even though Turkey ostensibly backs the opposition Syrian rebels against the Russian-backed Syrian regime. Iran, Turkey and Russia all oppose the US presence in Syria and have worked to undermine America’s role. Iran and Turkey also oppose Israel and support Hamas. Hamas leader Ismail Haniyeh recently met Hezbollah leader Hassan Nasrallah in Lebanon. It’s unclear if Turkey or its Qatari ally will also support Hezbollah as part of the Iranian alliance.

Turkey has been increasing its aggressive threats against fellow NATO-member Greece, and also threatening Egypt, Cyprus, the UAE and other states in the region. It has invaded and occupied part of northern Syria and often bombs northern Iraq, claiming to be fighting militants. In recent years Ankara tried to get Tehran to work with it against far-left Kurdish insurgents.

At the same time Turkey works with Russia to buy air defense systems from Moscow, much to Washington’s dismay. Erdogan’s hosting of senior Hamas leaders in Istanbul also received complaints from the US State Department.

It now appears that Turkey and Iran, which have sought to boost trade, are continuing to become closer politically. The overall substance of the Tuesday discussions were not yet available to the press. Anadolu, which is a pro-government channel in Turkey, described the talks as the 6th high level discussions.

They aim toward cooperation. While Turkey often attacks Greece, France and other countries with threats and insults, it tends to praise Iran, Russia, Hamas and other extremists. Anadolu says Turkey and Iran will discuss regional and international matters as well as COVID-19.

How Does This Relate to Bible Prophecy?

The Bible talks about a coming war in Ezekiel 38-39 in-which Russia, Iran, Turkey, along with Libya and Ethiopia, come from the north to attack the nation of Israel. Those who know this prophecy have watched closely as this Ezekiel alliance has grown closer, and Russia, Iran and Turkey are operating north of the Jewish State in Syria. Scripture explains that this war will occur in the last days, so the stage setting of its fulfilment should point to His soon Return of Jesus Christ. 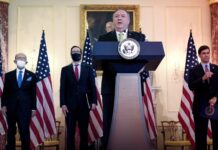