Graffiti reading “Kill All Jews” and a swastika were discovered drawn in black marker in the stairwell of a high school in Brooklyn, New York.

The graffiti was discovered on Thursday afternoon at Brooklyn Technical High School. A school employee discovered the message at the end of the school day, the New York Daily News reported. The NYPD’s Hate Crimes Task Force is investigating, according to the report.

Gov. Andrew Cuomo told the newspaper that he was “appalled” by the graffiti.

“This is New York, and we have absolutely zero tolerance for such acts of intolerance and bigotry,” he said. “When you attack one of us, you attack all of us, and we will stand united with the Jewish community to condemn these illegal acts and eradicate this cancer of hate.”

As of Saturday, no arrests had been made in the case.The incident comes amid an increase in antisemitic violence against Jews in the city. 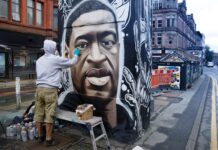