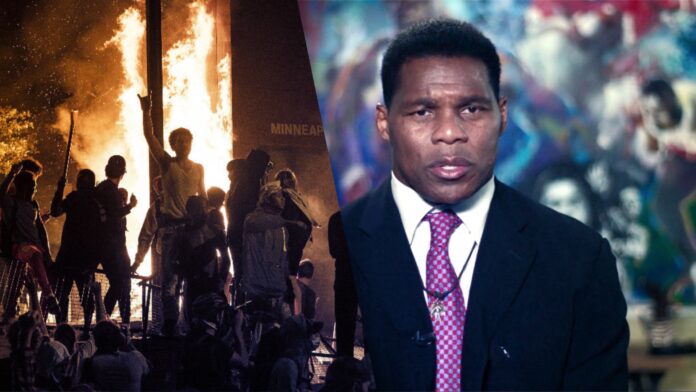 In a video shared to social media, Walker said that he could not understand why Trump had to condemn The Proud Boys while Biden got away on Antifa, noting the extreme amount of violence committed by the left-wing group.

“The Proud Boys, I’ve never heard of,” Walker said. “So I was confused why [debate moderator] Chris Wallace would ask the president about the Proud Boys. ‘Cuz I’ve never seen the Proud Boys break any windows, assault any police officer, kill anyone. Never seen them destroy a business, try to intimidate anyone, destroy a restaurant, but I have seen BLM and Antifa do that.”

“[Wallace] didn’t ask the vice president that question, which is interesting because he said it is an idea. Well, what’s interesting about that idea is his running mate, Senator Harris, created a website to collect money to bail his idea out of jail. Well, it’s interesting, he didn’t ask them about that.  Just a question I’d like to know the answer to,” he concluded.

Herschel Walker was likely referring to the time that Kamala Harris tweeted out the Minnesota Freedom Fund, which was designated to provide bail for people arrested during protests; this would include people rioting.

As noted by Fox News, Walker’s statement echoes comments made by podcast host Dave Rubin following the debate this week.

“If what Joe Biden is trying to say is that they don’t have laminated business cards ready to hand out when they are doing these things, then I suppose he’s correct,” Rubin continued. “But I’ve done many public speaking events, usually about free speech and free markets, capitalism, good stuff, no bigotry, no racism or hatred involved, and Antifa has shown up and violently protested, pulled fire alarms.”

Walker endorsed Trump at the Republican National Convention, after which, he claimed, his outspoken support for the president cost him friendships.

“In society today, if you’ve got a black friend, oh, jeez you’re like king,’’ Walker said. “But not one time has (Trump) asked me to speak for him. I don’t even think he knew I was going to speak this time. I’m the one that asked.’’

“Losing friends has been a big cost,’’ he added. “I lost some friends, and that’s what’s so strange about it. How could in a country like America you disagree with someone that you now want to injure that person or you just don’t want to talk to them no more? Where did it get that you become a country like that?’’