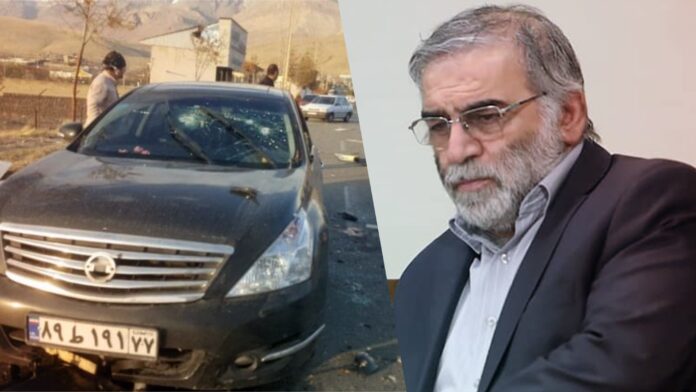 The head of Iran’s nuclear program, Mohsen Fakhrizadeh, 59, was assassinated in Damavand, east of Tehran, Iran confirmed on Friday afternoon.

“The nuclear scientist Mohsen Fakhrizadeh was assassinated today by terrorists,” the Iranian Defense Ministry wrote in a statement, not blaming any specific entity for the incident.

Pictures from the scene show two vehicles, one blown up and one shot at from the front. Several local reports in Iran indicated that a suicide bomber was involved in the attack, but that has not yet been confirmed.

“In the last days of the political life of their … ally (US President Donald Trump), the Zionists (Israel) seek to intensify pressure on Iran and create a full-blown war,” commander Hossein Dehghan tweeted.

“We will strike as thunder at the killers of this oppressed martyr and will make them regret their action,” Dehghan added.

Later Friday, Hezbollah‘s deputy spokesperson, Sheikh Naim Qassem, addressed Fakhrizadeh’s assassination and said that the response for the incident is in Iran’s hand, and that Iran has every right to seek revenge for Fakhrizadeh’s death.

“We condemn this heinous attack and see that the response to this crime is in the hands of those concerned in Iran,” Sheikh Naim Qassem said in an interview with Al Manar television.

He said Fakhrizadeh was killed by “those sponsored by America and Israel” and said the assassination was part of a war on Iran and the region.

The death Fakhrizadeh is likely to complicate any effort by US President-elect Joe Biden to revive the detente of Barack Obama’s presidency, and may lead to confrontation between Iran and its foes in the last weeks of Donald Trump’s presidency.

Prime Minister Benjamin Netanyahu’s Office and the Pentagon have yet to comment on the reports.

Fakhrizadeh was a senior Iranian Revolutionary Guards Corps (IRGC) officer and headed Iran’s nuclear weapons project. He was a professor of physics at the Imam Hussein University in Tehran and was former head of Iran’s Physics Research Center (PHRC).

The semi-official Fars News Agency, affiliated with the IRGC, stated that Fakhrizadeh was injured in the attempted assassination and later died in the hospital.

“News sources say a scientist has been the victim of an assassination attempt in an armed attack by unknown people on his team of bodyguards,” Iranian state television said in rolling coverage of the incident.

“Unfortunately, the medical team did not succeed in reviving him, and a few minutes ago, this manager and scientist achieved the high status of martyrdom after years of effort and struggle,” a statement by Iran’s armed forces carried by state media said.

Chief of Staff of Iran’s Armed Forces Mohammad Bagheri said that terrorist groups and the perpetrators of this blind act need to know that “severe revenge” awaits them.

The Iran Atomic Energy organization has yet to confirm the reports, saying that no incident involving nuclear scientists took place to the best of its knowledge, ISNA News Agency reported.

Fakhrizadeh has long been suspected by Western, Israeli and Iranian exile foes of the Islamic Republic to have masterminded what the UN nuclear watchdog and US intelligence services believe was a coordinated nuclear weapons program in Iran shelved in 2003.

He had the rare distinction of being the only Iranian scientist named in the International Atomic Energy Agency’s 2015 “final assessment” of open questions about Iran’s nuclear program and whether it was aimed at developing a nuclear bomb.

In 2018, Prime Minister Benjamin Netanyahu said, “remember that name,” referring to Fakhrizadeh, after he announced that the Mossad had obtained 100,000 files from Iran’s secret nuclear archives.

The files retrieved by Mossad focused on the secret Iranian nuclear program that was developed from 1999 to 2003 called Project Amad, which was led by Fakhrizadeh. When Iran entered the 2015 nuclear deal, it denied that such a program existed.

In 2003, Iran was forced to shelve Project Amad, but not its nuclear ambitions. It split its program into an overt program and a covert one that continued the nuclear work under the title of scientific knowhow development, Netanyahu said at the time.

It continued this work in a series of organizations, which in 2018 were led by SPND, an organization inside Iran’s Defense Ministry led by the same person who led Project Amad – Dr. Mohsen Fakhrizadeh, Netanyahu said.