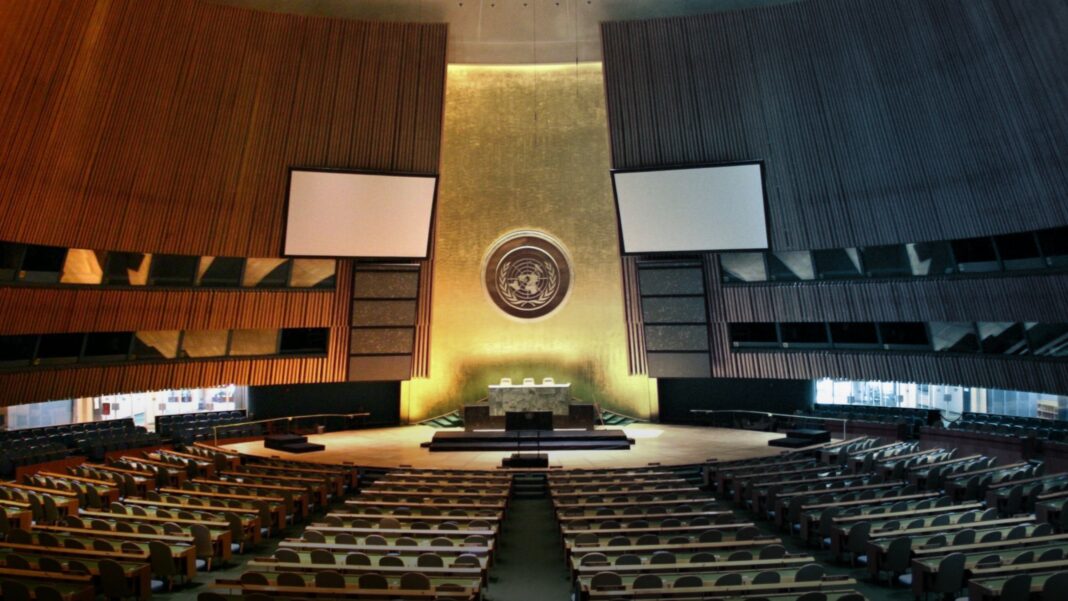 The United Nations voted overwhelmingly to approve a draft resolution in favor of Palestinian self-determination, with Israel and the United States voting against.

The concluding remark of the statement appeared to take a direct shot at the European Union, which has led a policy obliging all 28 member states to label exports produced in Israeli towns beyond the Green Line as having been made in the settlements.

The proposal on Thursday in the UN General Assembly’s Third Committee — the committee that deals with human rights and humanitarian affairs — passed 163 to 5, with 10 abstentions. Canada, which typically votes alongside Israel in such resolutions, stood with the majority.

The resolution emphasized “the right of the Palestinian people to self-determination, including the right to their independent State of Palestine” and “stressed the urgency of achieving without delay an end to the Israeli occupation that began in 1967 and a just, lasting and comprehensive peace settlement between the Palestinian and Israeli sides,” based on a two-state solution.

It is part of a large package of 20 pro-Palestinian resolutions that are passed by the General Assembly every year, which the Israeli Mission to the UN has long argued proves the bias of the international forum.

In addition to Israel and the US, the Marshall Islands, Micronesia and Nauru also voted against the resolution. Australia, Cameroon, Guatemala, Honduras, Kiribati, Palau, Papa New Guinea, Rwanda, Togo and Tonga all abstained.

Last year, Canada voted in favor of a nearly identical resolution, with its envoy justifying the move as a response to US Secretary of State Mike Pompeo’s decision to repudiate a State Department legal opinion that deemed Israeli settlements to be illegal. In previous years, Canada had voted alongside Israel, but refusing to do so for a second straight year indicated that the vote was a principled stand.

“Canada’s vote today is a reflection of our longstanding commitment to the right of self-determination for both Israelis and Palestinians,” Canadian envoy Bob Rae said in an address to the General Assembly, noting the draft’s support for a two-state solution — a framework that the Israeli government has not officially rejected.

Palestinian Authority Foreign Minister Riyad al-Maliki praised the vote, calling it “a natural response from the international community to the Israeli occupation’s violations, as well as a response to the US Secretary of State Mike Pompeo’s visit to the colonial Israeli settlements.”

Pompeo visited a winery near the settlement of Psagot on Thursday, the first such visit by a top US diplomat. There, he announced new US guidelines requiring all US exports from Israeli controlled areas of the West Bank to be labeled as “made in Israel,” in a reversal of decades-old policy that differentiated between both sides of the Green Line.

Until now, US policy has required products made in the West Bank to be labeled as such. But with Pompeo’s newly announced rules, which he said were “consistent with our reality-based foreign policy approach,” all producers within areas where Israel exercises authority — most notably Area C under the Oslo Accords – will be required to mark goods as ’Israel,’ ’Product of Israel,’ or ‘Made in Israel’ when exporting to the United States.

Pompeo insisted that the US still remains committed to achieving “sustainable peace” and will “continue to oppose those countries and international institutions which delegitimize or penalize Israel and Israeli producers in the West Bank through malicious measures that fail to recognize the reality on the ground.”

The concluding remark of the statement appeared to take a direct shot at the European Union, which has led a policy obliging all 28 member states to label exports produced in Israeli towns beyond the Green Line as having been made in the settlements.