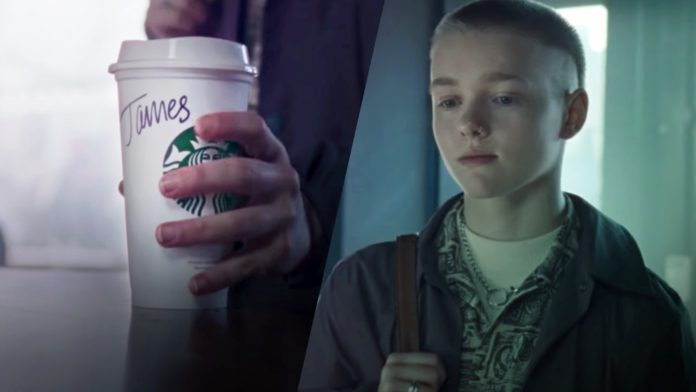 Starbucks in the UK has taken a swan-dive into LGBT activism, releasing a new manipulative advertisement targeting teens as part of a Trans campaign, “what is your name?”, in-which the coffee chain urges its commitment to calling you by your chosen gender name.

The ad, meant to pull on heartstrings, depicts a Transgender teen falling into depression by the world’s lack of recognition of her chosen new Trans name “James.” The depression lifts, however, when she walks into Starbucks, which is ready, willing and able to force their employees to call her the name of her desire.

The commercial, which is praised profusely by the LGBT community, has won Channel 4’s Diversity in Advertising Award, guaranteeing it £1 million in Commercial airtime in the UK.

“At Starbucks, writing your name on a cup and calling it out is a symbol of our warm welcome. It’s a small gesture, but it’s symbolic of what we believe in Recognition and acceptance, whoever you are, or want to be. We welcome everyone,” the ad’s description reads on Starbucks’ Youtube.

The so-called “ground-breaking” campaign was made in partnership with a UK Transgender organization “Mermaids,” which targets youth from 13-19. The Coffee giant has pledged to donate £100,000 ($130,200) to the company through the limited-time sale of Mermaid cookies.

Transgender promotion in the United Kingdom has been targeted heavily toward children. In December, Decision magazine reported that the Gender Identity Clinic in London had seen large numbers of doctors resigning their positions in recent years because they say children are being “over-diagnosed and over-medicalized”:

Former GIDS [Gender Identity Development Service] employees said they felt pressured to prescribe patients medication rather than treat them psychologically. Failing to pursue drug treatment would brand them as “transphobic,” they said.

According to the Telegraph, almost half of the children treated at GIDS are prescribed hormone-blockers to halt puberty. While GIDS pushes drug treatments for many of their patients, many other doctors argue that gender confusion stems from psychological issues or simple peer pressure.

“With counseling, or even watchful waiting, an average of 85% of these children would have a resolution of their distress by early adulthood,” said endocrinologist Dr. William Malone.

“We are beginning to see many young adults begin attempts to reverse the damage that has been done by hormonal and surgical treatments,” he added. “As a result, investigations into gender clinic practices have begun in the U.K. and are being considered in Australia and Sweden.”

“We are extremely concerned about the consequences for young people,” said another doctor. “For those of us who previously worked [at GIDS], we fear that we have had front row seats to a medical scandal.”

It is clear that in order to propel their agenda forward, children are put at risk by being rushed into taking life-altering and sterilizing drugs. This is not a matter of “providing support” to a child, as the above Starbucks advertisement attempts to convince parents.

The propagandizing and push for children and parents to get on board the Transgender train has nothing to do with a new modernized “acceptance and tolerance.” It is instead a promotion of an agenda, one that manipulates and pushes out those who push against it.

In Recent weeks Franklin Graham’s venue was cancelled for his tour of the UK, due to claims that “Graham’s appearance may incite hateful mobilization and risk the security of our LGBTQ+ community.”

A letter to the LGBTQ community in the UK—

It is said by some that I am coming to the UK to bring hateful speech to your community. This is just not true. I am coming to share the Gospel, which is the Good News that God loves the people of the UK, and that Jesus Christ came to this earth to save us from our sins.

The rub, I think, comes in whether God defines homosexuality as sin. The answer is yes. But God goes even further than that, to say that we are all sinners—myself included. The Bible says that every human being is guilty of sin and in need of forgiveness and cleansing. The penalty of sin is spiritual death—separation from God for eternity.

That’s why Jesus Christ came. He became sin for us. He didn’t come to condemn the world, He came to save the world by giving His life on the Cross as a sacrifice for our sins. And if we’re willing to accept Him by faith and turn away from our sins, He will forgive us and give us new life—eternal life—in Him.

My message to all people is that they can be forgiven and they can have a right relationship with God. That’s Good News. That is the hope people on every continent around the world are searching for. In the UK as well as in the United States, we have religious freedom and freedom of speech. I’m not coming to the UK to speak against anybody, I’m coming to speak for everybody. The Gospel is inclusive. I’m not coming out of hate, I’m coming out of love.

I invite everyone in the LGBTQ community to come and hear for yourselves the Gospel messages that I will be bringing from God’s Word, the Bible. You are absolutely welcome.

The Transgender movement is in direct conflict with the morality and truth found in Scripture (Genesis 1:27, Romans 1:22-32). Those that share the Gospel are alienated and discriminated against unless they compromise God’s word.

We must now asked the question: Should Christians continue supporting Starbucks, especially within the United Kingdom, as they push this dangerous teen-targeted Trans-gender ad campaign?