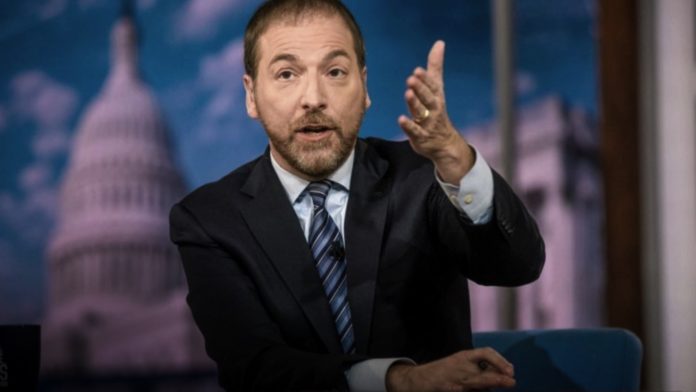 On Sunday, NBC News political director Chuck Todd dedicated the final Meet the Press of 2019 to insisting President Trump had brought about a “post-truth society.” The same network that pushed the totally-bunk Steele dossier for years and tried to sink Justice Brett Kavanagh’s nomination with the ridiculous allegations from Julie Swetnick, wanted to lecture the public about falling for and spreading lies and misinformation. In the process, Todd lashed out at Christians for believing in “fairy tales.”

“This Sunday, alternative facts. The assault on truth (…) This morning, Meet the Press takes an in-depth look at our post-truth society and how a changing media landscape has created chaos out of order,” Todd indignantly announced during the opening tease.

Todd began the show by lauding Buzzfeed News for discovering a “fake news farm” in the Macedonian town of Veles. “Some 140 websites pushing out made-up, pro-Trump, quote, ‘news stories’ written for Americans,” he added.

Unfortunately for Todd, Buzzfeed News was itself a kind of fake news farm. They were the first news outlet to publish the debunked Steele dossier, which was maliciously used by the FBI to obtain spy warrants against a Trump campaign aide. They were also the subject of one of the rare public statements from the Special Counsel during the Russia probe. Robert Mueller rebuked reporting claiming Trump lawyer Michael Cohen was directed to lie to Congress by the President.

Todd would eventually bring on New York Times executive editor Dean Baquet and Washington Post editor Marty Baron to opine about fake news. In a conversation about the media’s need to fact-check in the Trump-era, Baquet seemed to admit his paper wasn’t interested in fact-checking presidents until Trump came along:

I mean, Marty has a very extensive fact check operation as do we. And those things didn’t exist three or four years ago and they’re an acknowledgment that one of the jobs of the news media is to sort through all of the BS, if I can say that.

In the midst of their conversation, Todd latched onto a random, almost year-old letter to the Lexington Herald Leader. It was a letter he held up as a “fascinating attempt to kind of explain why some people support President Trump.” Reading from the letter, Todd proceeded to bash Christians, Jews, and Muslims for their religious beliefs:

“Why do good people support Trump? It’s because people have been trained from childhood to believe in fairy tales. This set their minds up to accept things that make them feel good. The more fairy tales and lies he tells the better they feel. Show me a person who believes in Noah’s ark, and I will show you a Trump voter.”

“Look, this gets at something, Dean, that my executive producer likes to say, voters want to be lied to sometimes. They don’t always love being told hard truths,” Todd proclaimed.

In Todd’s report about the evolution of fake news, he spoke with Ben Nim, from Graphika, a social media analysis company. According to Nim, there were “four Ds” when looking at how leaders try to deceive. As explained by Todd:

Number one, dismiss, attack critics to erode their credibility and invalidate the facts. (…) Number two, distort. If the facts are against you, make up your own facts. (…) Number three, distract. Whataboutism or the “I’m rubber, you’re glue” defense. If are you accused of something, accuse someone else of the same thing. (…) Number four, dismay. Threats and intimidation.

Interestingly, the liberal media have done every one of those things. Todd and the CNN media team have attacked their critics and those who reject the narrative. In fact, later in the show, Todd would compare Fox News to Russian state media. On the second point, NBC and other news outlets were being sued for falsely labeling a 16-year-old conservative as racist because they wanted to invent a racist incident on the step of the Lincoln Memorial. Just to name a few.

Unwilling to admit the media have been actively campaigning against President Trump since before he was elected, Todd seemed to demand that they start a campaign to “market the truth.” His plan was to go around the country and lecture people into believing the media.

But in the middle of those remarks, he seemed to make a critical slip up by angrily declaring: “by the way, if I utter a fact on TV on purpose I get fired.” Obviously, he meant if he uttered a lie purposely he would get fired. But that was equally laughable.