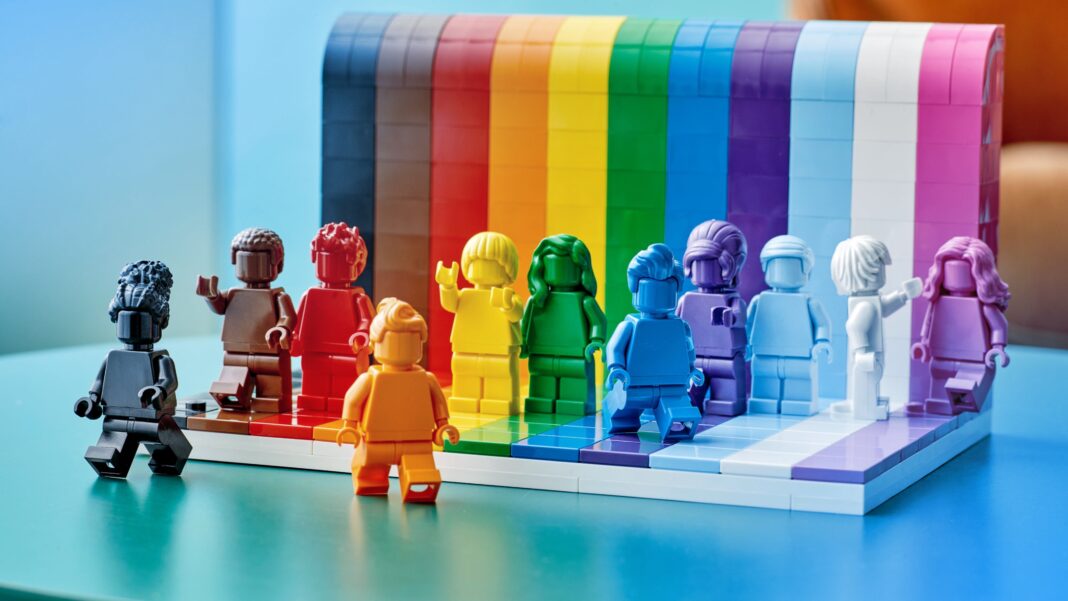 The Left is tearing down mainstream values — brick by brick! Lego, the latest company to pander to the woke, just decided to test the waters with a rainbow set of “LGBTQIA+” figures. “Everyone is awesome!” the iconic toy company tweeted with a picture of the pack, which also boasts a transgender-flag colored spectrum. And if you’ve always wanted your kids to get an early education on cross-dressers, creator Matthew Ashton says you’re in luck. Although the characters are supposed to be non-conformist, the purple figure is meant as “a clear nod to all the fabulous drag queens out there.”

Of course, Lego isn’t the first toy company to wade into radical politics. Barbie and American Girl dolls have tried it (to very vocal protests). So did Mr. Potato Head — for about 12 hours. The uproar over the iconic spud was so overwhelming that Hasbro was forced to reverse course with record speed. “Hold that Tot!” the company tweeted. “Mr. Potato Head isn’t going anywhere. While it was announced today that the potato head brand name and logo are dropping the ‘Mr.’ I yam proud to confirm that Mr. and Mrs. Potato Head aren’t going anywhere and will remain Mr. and Mrs. Potato Head.”

If Lego wants to trot down this same controversial path, they’ll learn pretty quickly that American parents aren’t interested in their building blocks of indoctrination. Most U.S. consumers are wide awake, thanks to the cancel culture, and they’re not about to let a major decision by Lego corrupt a playful tradition that they loved as children themselves.

Unfortunately, these days, a family can’t even turn on PBS without seeing something shocking created specifically for kids. In New York City, the network is under incredible fire for broadcasting a drag queen series aimed directly at children as young as three. “Let’s Learn,” the program is called. And children learned all right — about a drag queen called “Lil Miss Hot Mess.” Apart from singing from his book “The Hips on the Drag Queen Go Swish Swish Swish” to the tune of the “The Wheels on the Bus Go Round and Round,” Lil Miss explains to children what he does. “Everyday people who like to play pretend and dress up as often as we can,” before adding, “I think we make pretty good role models.”

PBS, which rakes in a significant amount of taxpayer dollars, has been overwhelmed by complaints. And no wonder, considering that the man hosting the show happily says, “I think we might have some drag queens-in-training on our hands.” It also has some angry viewers on its hands too.

For now, FRC’s Jared Bridges warns, “Parents should be sure that we’re not letting any toy corporation (or school, or media company, or fill-in-the-blank) be the source about what’s true in the world. Moms and dads should be aware that no area of the world — not even the toy aisle — is immune from the age-old effects of deception.” The sad part about Lego’s campaign is that everyone is awesome. But they’re awesome because they’re created in the image of God to be uniquely male and female — a truth that’s unchangeable, down to their very DNA.

If Lego wants to turn its back on thousands of years of science, morality, common sense, and public opinion, that’s their choice. But they need to know that there’s a price for their extremism.

Ken Ham, took to FaceBook to warn the people at lego, of the ramifications for taking such steps for the sake of falling in line with our ‘woke’ society.

“Yes, one can build all sorts of things with Lego blocks,” Ken Ham wrote. “But the people at Lego are building their own houses (lives) on the wrong foundation of sand, and the outcome?—”And great was the fall of it” (Matthew 7:27).”

The Bible instructs parents in Proverbs 22:6 to “Train up a child in the way he should go,” with Biblical truth! This verse is all the more relevant in a world where our children’s innocence is continuously in the crosshairs.