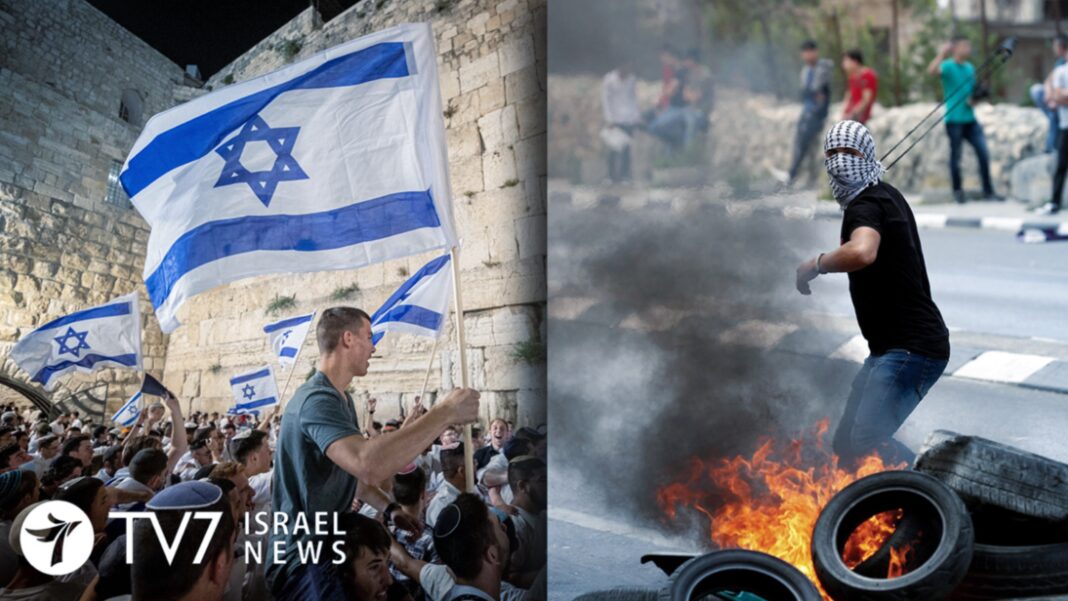 Defense Minister underscored the “need to avoid friction and protect the personal safety of Israel’s citizens, Jews and Arabs alike,” and asked that messages in that spirit be relayed onward.

Israel is on edge after Palestinians declared a so-called “Day of Rage” over the delayed-holding of an annual Flag Parade.

The controversial event is traditionally held on Jerusalem Day, in commemoration of the city’s reunification after Israel captured the eastern side from Jordan in the 1967 Six Day War. This year’s march, however, came to abrupt halt on 10 May, when Gaza terrorists fired a barrage of rockets that marked the start of Operation Guardian of the Walls.

The annual parade of mostly nationalist right-wingers traditionally follow a route into Jerusalem’s Old City through the Damascus Gate, while cheering and waving Israeli flags, winding through the Muslim Quarter while making their way to the Western Wall Plaza.

Immediately prior to this year’s event, there had been heavy clashes between Arabs and Israeli security forces during observance of Ramadan over the perceived hindering of Muslim rights, combined with protests over a property dispute in the nearby Sheikh Jarrah neighborhood, that lead up to the Gaza conflict.

Even though plans to hold the Flag March last week were denied over police insistence that the marchers avoid the flashpoint Muslim Quarter of the Old City, Hamas reacted with fury.

“We warn Israel, the mediators and the entire world against allowing the march in Jerusalem to proceed towards the al-Aqsa mosque – and hope this clear message is received – so that Thursday does not become a day like May 11, when the first rockets from Gaza targeted the center of Israel,” said senior Hamas official Khalil al-Hayya.

The event was reinstated as one of the last acts in office by former Prime Minister Benjamin Netanyahu for 6 PM local time this evening. In efforts to avoid friction with Palestinians, Israeli police blocked streets near the Damascus Gate entry into the Old City – the site of violent clashes during recent Muslim observance of Ramadan.

New Public Security Minister Omer Barlev – who took office yesterday – greenlighted the event, saying that in a democracy, citizens have the right to demonstrate.

“We will march, thousands of us, with flags where we’re told. Anywhere we’re told not to march – we won’t march,” Matan Peleg, one of the march organizers, told Israel’s Army Radio.

Palestinians have nevertheless assailed the march as a “provocation,” and called for protests in Gaza and the West Bank. Both Hamas and Palestinian President Mahmoud Abbas‘s Fatah faction have called on Palestinians to flock to the Old City to counter the march.

“We warn of the dangerous repercussions that may result from the occupying power’s intention to allow extremist Israeli settlers to carry out the Flag March in occupied Jerusalem,” Palestinian Prime Minister Mohammad Shtayyeh said.

The Jerusalem Department of the Palestine Liberation Organization (PLO) declared there would be an “explosion” if Tuesday’s scheduled Jerusalem flag parade goes ahead, with unrest extending beyond Jerusalem to the Palestinian territories.

Amid a threat by Hamas to resume rocket fire at Israel if the parade is held, the IDF ordered the deployment of additional Iron Dome air defense batteries to Israel’s south yesterday, and the army was ordered to go onto high alert.

“We are preparing for renewed fighting,” warned IDF Chief of Staff Kochavi, cautioning that Israel’s response to attacks from Gaza would be more punishing than during the May conflict.

A Palestinian source told the Ynet news outlet, however, that “the terror group that rules Gaza instructed the Palestinian factions there to refrain from rocket fire and limit their activities to protests on the border, including igniting fires in nearby Israeli fields with the use of incendiary balloons.”

Several hours before the event was due to start, small groups of Palestinians clashed with IDF troops near the border fence with Gaza. According to the Israeli army, one rioter was lightly wounded after being shot in the leg.

Incendiary airborne devices and fire balloons launched from Gaza ignited several blazes in fields in Israeli communities near the border with the Palestinian enclave, witnesses and the Israeli fire brigade said.