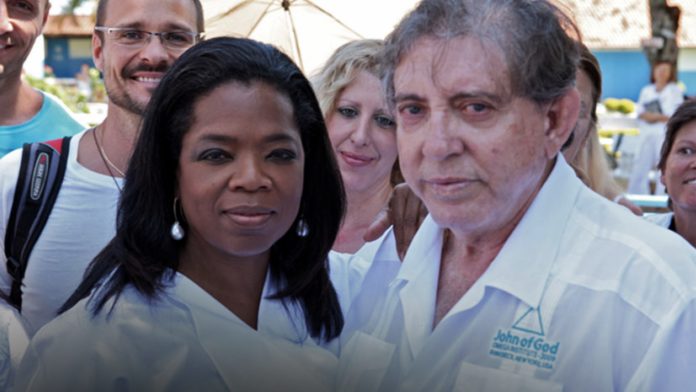 João Teixeira de Faria, the Brazilian self-proclaimed “spiritual healer” known as “John of God,” was sentenced Thursday to 19 years in prison on four rape charges after being accused of sexual abuse by hundreds of women, including his own daughter.

The spiritual guru and now convicted rapist became an international name after Oprah Winfrey interviewed the “inspiring” figure back in 2012, after which he reportedly was visited by several American celebrities, among them singer and songwriter Paul Simon and actress and model Naomi Campbell.

“A judge in Goias state issued a sentence of 19 years and four months for four rapes of different women, according to a statement from the court,” The Associated Press reported Thursday. “Lawyers for the 77-year-old João de Deus said in a statement that they will appeal the decision.”

As The Daily Wire reported last December, Faria has been accused of sexual abuse by over 300 women and girls, including his own daughter. After being officially declared a fugitive in mid-December, and attempting to withdraw nearly $9 million from a bank, Faria turned himself into authorities, who initially charged him with sexual violation through fraud.

“Local outlets say Faria surrendered in a road to the small, centrally located town of Abadiania, where he has run his now-world famous spiritual center since 1976,” The Daily Wire reported at the time.

Though Faria had run his “healing center” for decades, and had built a strong local following in Brazil, he became an international name after Oprah’s 2012 special highlighting him and his center. After that time, the center began to attract thousands of international tourists, including some high-profile figures:

Faria founded his psychic healing center in 1976, but he did not reach true international fame until he was promoted by Oprah Winfrey about five years ago. Since she produced a special focusing on his “spiritual healing” methods, which include channeling “spirits of the dead” and conducting surgery on patients suffering serious illnesses without anesthesia, his center attracts thousands of tourists annually, including several celebrities, among them Paul Simon, Naomi Campbell, and, according to some, Bill Clinton.

Soon after the allegations against Faria first emerged, Winfrey disavowed him, saying, “I empathize with the women now coming forward and hope justice is served.”

Simon has also publicly commented on his contact with the “healer,” saying his visit to the center ultimately failed to help him with his chronic “violent” dream problem.

The first woman to come forward with accusations against the disgraced guru is a Dutch choreographer, who told Rede Globo on December 7 that Faria sexually abused her.

“Within days, prosecutors in Goias, the state where Abadiania is located, said they had received hundreds of similar allegations,” The Daily Wire reported. “A week after the Rede Globo report, a judge issued a warrant for Faria’s arrest, giving him until 2 p.m. the next day to turn himself in.”

Along with discovering that Faria attempted to withdraw nearly $9 million from a bank within days of the first accusation, prosecutors say they found “firearms and large quantities of cash in a house used by de Faria as a spiritual retreat.”