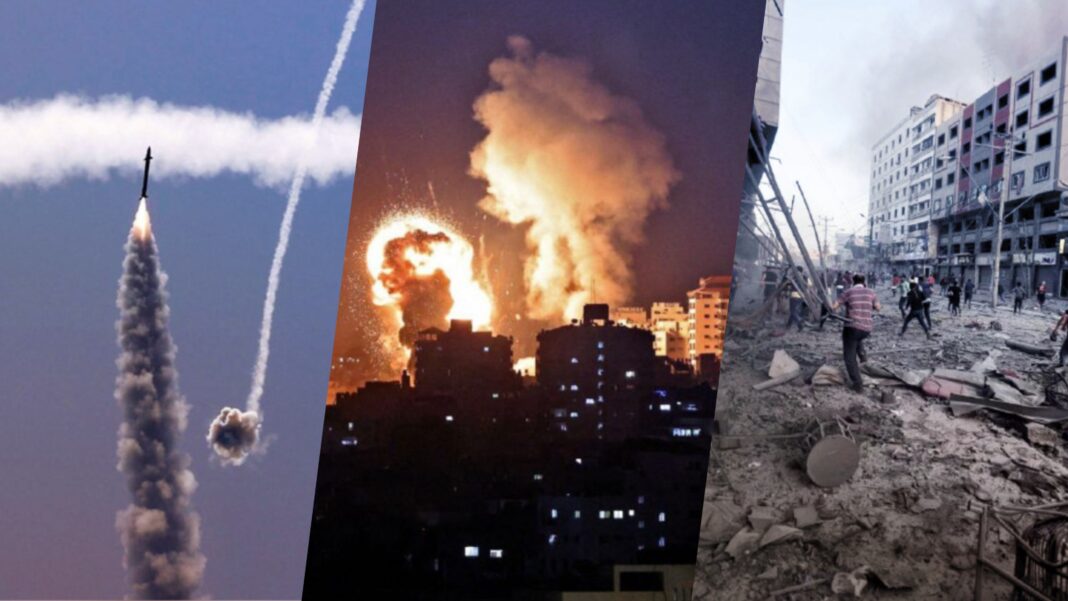 Shalom from the very eventful Jewish state! As you probably know by now, my neck of the woods has been anything but quiet over the last four days, as Israel’s military has been nonstop in its response to rocket attacks from Hamas as Ramadan comes to an end. If you’ve been following my updates on Telegram, you will note that the typical tactics employed by the Arabs were in full swing this week. First, they staged conflicts on the Temple Mount to make it look like Israelis were the aggressors, and now they’re carrying out what they want the world to believe are justified attacks. There have already been over 1,500 rockets launched, mostly intercepted by the Iron Dome. This is the most rockets we’ve dealt with since the busy weekend in 2019 when over 600 were fired – more than double the amount.

Hamas even released a video today revealing that it has acquired suicide drones (as if you needed more evidence that it’s funded by Iran).

The IDF implemented Operation ‘Guardian of the Walls’ on Tuesday, which is dedicated to one specific goal – the decimation of Hamas’ rocket-launching capabilities. And rest assured, there is no question we’re committed to seeing through, as it is clearly exemplified in the continuous airstrikes throughout the Gaza Strip, flattening buildings and eliminating known terrorists. Gaza is going to look very different by the end of this week.

It is fair to say that the tension increased immensely after Hamas decided to launch rockets towards Jerusalem, and then followed up Tuesday with an attack on Tel Aviv. One single barrage consisted of 130 rockets! Once again, the Arab people are going to suffer at the hands of another Iranian terror proxy. That being said, Israel is doing everything it can to warn people to evacuate buildings before we strike. As of Wednesday, we’ve killed six top tier Hamas operatives.

Thus far, at least seven Israelis have been killed and dozens have been injured. Let me remind you how much I miss the 45th president of the United States. Number 46, bless his heart, simply told Israel to exercise restraint throughout this conflict. Tell me, at what point is it okay to begin defending the people you love? In all of this, don’t forget that the source of what’s taken place this week isn’t in Israel or Gaza, but to the east – Iran!

To express the mutual appreciation that we share in being citizens of the state of Israel, tomorrow morning, my town will be accompanied by the four surrounding Arab villages to partake in a unified rally to declare that we will not be divided. The Israeli flag will be the only flag flown, and we believe it will be a sign of hope to others. Enough is enough. So, we have an internal glimpse of hope, but we also have one that’s external, as Hamas is now apparently desperate for a ceasefire.

You must understand something; Hamas certainly didn’t win on a military level this week, but it did manage to succeed in the incitement of young, local, Israeli Arabs that rioted in many places across Israel, including outside of my congregation in Haifa. The tender fabric of coexistence between Israeli Jews and Arabs was severely damaged. It will take years to heal.

If that’s not enough, Israel has had to deal with Hezbollah as well, carrying out a strike on its military targets in southern Syria on Friday. Furthermore, three Palestinian terrorists were killed on Friday when they tried to kill IDF soldiers in Samaria.

Sunday evening will mark the beginning of Shavuot (Pentecost) here in Israel. This year it will probably be similar to 2020 in that we are staying home. However, while it was COVID that kept us home last year, it’s the violence keeping us inside in 2021.

Please continue to pray for the situation in Israel.

Psalm 121:3-4 KJV – “He will not allow your foot to be moved;
He who keeps you will not slumber. Behold, He who keeps Israel”
Shall neither slumber nor sleep.