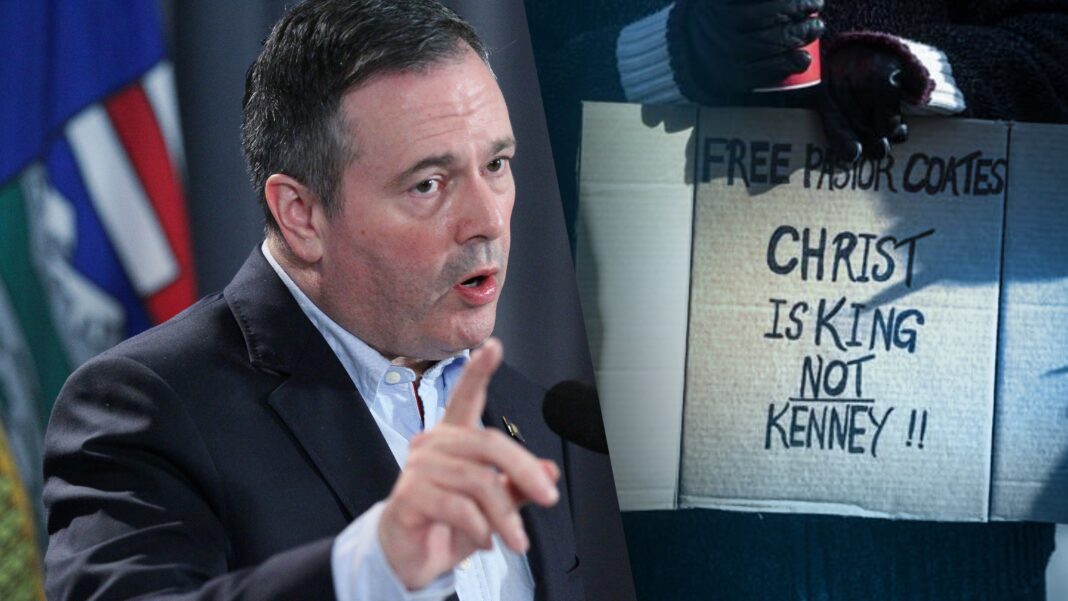 During a live-streamed question-and-answer session on May 19, Alberta’s Premier Jason Kenney spent nearly ten minutes vilifying Christian pastors who disobey his orders. He claimed that the pastors were spreaders of disease, and were jeopardizing their neighbour’s health. Without citing any specific scripture, Mr. Kenney claimed that assembling for worship contrary to his lockdowns is a “reckless disregard” of a “biblical mandate.”

Unfortunately, the premier’s description of the rule of law is incomplete and misleading.

The Canadian Charter of Rights and Freedoms, which is part of our Constitution, protects freedom of conscience and religion, freedom of thought, belief, opinion and expression, and freedom of association and peaceful assembly. In contrast, lockdowns and other restrictions prohibit peaceful assembly and communal worship. Lockdowns destroy large swaths of civil society by making it illegal for Canadians to associate freely with others in social, business, athletic, religious, recreational and entertainment pursuits and activities.

The Constitution is what stands between politicians and total control of society. Indefinite lockdowns. Peaceful protestors and pastors in jail. Government control over the internet through Bill C-10. No more travel, internationally or between provinces. No more special family gatherings at important occasions like Christmas, birthday parties, weddings and funerals. Permanent poverty. Massive debt left to our children and grandchildren.

By waging constant war on civil liberties and by refusing to justify demonstrably, with evidence put before a court, the ongoing violations of Charter rights and freedoms, it is Mr. Kenney who disobeys the rule of law, not the peaceful pastors.

The Charter places no onus on pastors to justify their actions. Rather, the Charter places the onus on politicians to justify their violation of religious and other freedoms. In court actions in Alberta, BC and Ontario, governments have not placed any persuasive medical or scientific evidence before judges to support the governments’ theory that church services are deadly. While barricading GraceLife Church, the government has no evidence that this church caused or contributed to any COVID-19 deaths.

The Charter demands that governments provide evidence, not mere assertions and speculation. Citizens have a right to this evidence, if it exists. Thus far, the preponderance of evidence demonstrates that lockdowns are the worst and most destructive public policy decision in Canadian history.

Premier Kenney also claimed on May 19 that churches that continue with communal worship breach their “biblical mandates.” But nowhere in the Bible is there a single instance of a closure of the sanctuary or temple service because of the presence of a disease. You can search from Genesis to Revelation, and you won’t find it.

Mankind has always suffered from numerous diseases for which there was (or is) no cure. Leprosy, for example, was prevalent in biblical times. It was always horrific, and caused massive disfigurement. It resulted in the isolation of a person, not for 14 days, but being cast out of society for the rest of their lives.

Contrast that with COVID-19, which has a 99.7% survival rate and poses no threat whatsoever to roughly 90% of the population. Most who get it, have no symptoms or only mild ones, and recover without any medical intervention whatsoever. Government data and statistics tell us that Canadians under 70 years of age should fear getting into a car more than they should fear COVID-19. There is no rational basis for the disproportionate and extreme fear that Mr. Kenney and other politicians continue to promote.

The Bible is, however, replete with examples of civil disobedience. The Hebrew midwives disobeyed a direct order from Pharaoh in Exodus 1. Jonathan and the soldiers openly defied Saul, then king of Israel in I Samuel 20-22. Three Hebrew worthies refused to bow to Nebuchadnezzar’s statue of gold in Daniel 3, even though they were threatened with being burned alive. Daniel himself refused to honour the law of Darius the Mede and was consequently thrown into the lion’s den in Daniel 6. In Acts 5, the disciples were prohibited from preaching publicly, but they were specifically instructed by the angel who delivered them from prison to go back and continue preaching, in open disobedience to human authorities.

Taking their instructions from the Bible, principled people for millennia have – at great personal risk – stood up to tyrants. The American Quakers in free states disobeyed the laws which made it illegal to assist run-away slaves. Corrie ten Boom and her family hid Jews in their home in the Netherlands during the Nazi occupation, contrary to the laws in force.

Some will argue that public health orders are good laws, worthy of obedience. If that were true, Mr. Kenney’s government would have submitted medical and scientific evidence in court a long time ago, relishing the opportunity to humiliate the “unhinged conspiracy theorists”, as Jason Kenney has publicly described lockdown opponents. If public health orders actually produce more good than harm, governments would actively gather comprehensive data on lockdown benefits as well as lockdown harms. Instead, Canada’s federal and provincial governments have demonstrably failed to conduct any meaningful cost-benefit analysis of their Charter-violating measures.

Publicly vilifying peaceful pastors is easier than responding to the growing number of MLAs who have openly challenged Premier Kenney’s lockdown measures. Making certain pastors the scapegoat of society’s problems and failed public policy is easier than presenting medical and scientific evidence in court to justify lockdown measures which violate basic Charter freedoms.

First, the demand was that churches be entirely closed; many complied because it was promised to be temporary. It was not too long before a few brave Pastors said, “I would rather obey God than man,” citing an impactful verse that urges Christians to not forsake “the assembling of ourselves together…and so much the more, as ye see the Day approaching” (Hebrews 10:25)

One of the courageous Pastors that opened his Church was John MacArthur. Harbingers Daily covered his heated battle with the LA County in court last year. Grace Community Church and MacArthur were relentlessly persecuted for preaching the Gospel in person and refusing to close the doors of their Church to people in need of Biblical Truth.

New claimed “waves” of coronavirus have provided ample excuse for leaders to keep churches shut, or limit their attendance. We learned very early on in the “pandemic” that churches were being unfairly targeted.

As MacArthur explained in his letter, the government does not have authority over the Church. Pastors need to bravely stop handing the power over to an agenda-driven world that despises Biblical truth.